#KanyeWest, #KimKardashian and #FirstLady Funny Memes Trend on Twitter As Netizens Struggle to Process the Announcement of Kanye West Running for 2020 US Presidential Election! 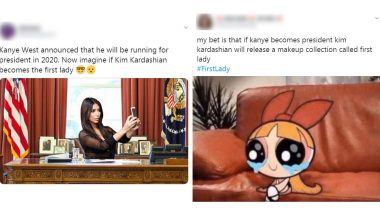 Call it an attempt on patriotism on the Fourth of July, or maybe just another way to be in the limelight, Kanye West announced that he is running for 2020 US Presidential election. His wife and potential first lady, Kim Kardashian retweeted it. Now, this is an announcement that is taking the netizens a while or more to process. It’s no easy! Soon after the American rapper tweeted his ‘#2020VISION,’ Twitter erupted with funny memes and hilarious reactions, imagining how the country would be with Kanye being the President and Kim the First Lady. #KanyeWest, #KimKardashian and #FirstLady were quick to trend on the microblogging platform as netizens struggle to process the headlines of Kanye running for the upcoming election in the country.

This is not the first time that the rapper had shown his interest in the White House. In 2015, at MTV VMAs, West first announced his plan to run for President in 2020. However, in 2018, the 21-time Grammy winner said he would no longer pursue a career in politics. Again in 2019, he changed his mind and said he would launch a presidential campaign in 2024. On the Fourth of July 2020 celebration in the US, the American rapper once again tweeted regarding his plan to run for President this year. Kanye West Announces His 2020 US Presidential Bid: Vivek Agnihotri Sums Up The Emotions of Twitterati!

“We must now realize the promise of America by trusting God, unifying our vision and building our future. I am running for president of the United States! #2020VISION,” tweeted Kanye.

We must now realize the promise of America by trusting God, unifying our vision and building our future. I am running for president of the United States 🇺🇸! #2020VISION

You have my full support!

It would be the fourth time, when Kanye has vowed to run for the nation’s higher office. As his tweet made it to the headlines, people were quick to share their reactions, and they are hilarious. From imagining Kim to be the First Lady to how would White House look if Kanye becomes the President, Twitterati is surely having a field day with #KanyeWest, #KimKardashian and #FirstLady funny memes and jokes.

Kanye west elected in to power and white house be like 👇 pic.twitter.com/YcsH0M9mVD

Kris Jenner is All Ready

Kris Jenner on her way to be Kanye’s campaign manager. pic.twitter.com/vzERWhrxRp

Kanye West announced that he will be running for president in 2020. Now imagine if Kim Kardashian becomes the first lady 🤓😦 pic.twitter.com/Oev9hGnZHm

Me after reading that kanye west is going to run for president #KimKardashian #KanyeWest pic.twitter.com/m7hgEozxzR

kanye west is running for president....which could make kim kardashian the first lady...i want OUT of this country no joke pic.twitter.com/53BwHpW9PM

2020 just said "You think I'M crazy? Think about Kanye West running for President during me, and Kim Kardashian as his First Lady while you hold my beer."

Plan Could be On Already!

my bet is that if kanye becomes president kim kardashian will release a makeup collection called first lady#FirstLady pic.twitter.com/3N3gVCL53m

So, are you all ready to see Kanye running for 2020 US Presidency? According to reports, if at all he plans to run for the election, he would have register himself as an independent presidential candidate in several states to make his way to the ballot. It will be interesting to see how the hip-hop star paves his way to the election.

(The above story first appeared on LatestLY on Jul 05, 2020 02:39 PM IST. For more news and updates on politics, world, sports, entertainment and lifestyle, log on to our website latestly.com).