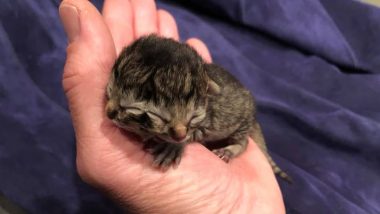 Biscuits and Gravy, the kitten who was born with two faces and suddenly rose to fame, have died. The kitten who was born on May 20 on an Oregon farm, one of six kittens born to Keenly, a cat owned by the King family. However, after three days, the kitten has died. Biscuits and Gravy had two noses, four eyes and two tiny mouths. But the duo only had one brain stem, however, they could eat, suck and meow from both faces. At first, he had been doing very well, but their health deteriorated soon and died. Mutant Calf with Two Heads, 4 Eyes and 2 Mouths from a Village in Kanyakumari Shocks Locals! Know More About the Rare Dicephalic Parapagus.

The family which had created a Facebook page for Biscuits and Gravy updated about the kitten's health. They updated the page saying, "He ate a lot, and he peed and pooped a lot. He just didn't grow. It's hard work for a little guy like him to support a large head with two complete faces." Cats born with two faces are also known as 'Janus' cats, after the ancient Roman god of time and duality. Janus is often depicted with two faces to look into both the future and the past. It's complications caused by the deformity that shortened the lifespan of Janus cats. The longest-lived Janus cat lived up until the age of 15. 'Rare' Two-Headed Wolf Snake Spotted in Odisha But It's Not The Only One! View Pics and Videos of Serpents With Two Heads From Around The World.

Ms King in another Facebook post wrote, "I want to thank everyone so much for your kindness and love. This story has been as tory of life and how very precious it is, whether days or years, whether animal or human, life is so very precious and every single life is unique." Meanwhile, their five other siblings are doing fine.

(The above story first appeared on LatestLY on May 25, 2020 08:04 PM IST. For more news and updates on politics, world, sports, entertainment and lifestyle, log on to our website latestly.com).