Landslide in Norway Takes Away Part of Alta Village Into Sea, Dramatic Video Has Netizens Saying Even Earth Wants to Escape 2020 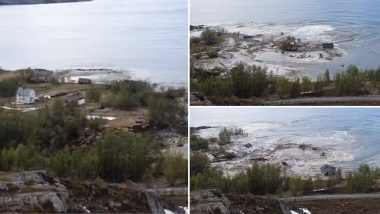 It wouldn't be wrong if we say, the world is going through a lot this year. While it faces the coronavirus pandemic, the weather changes are also severe, if not less. Dramatic footage from Norway has captured a huge landslide which washed away an entire portion of the village of Alta into the sea. Heavy rains resulted in the crack of land and the force of sea waves, washed almost 8 homes into the sea. The shocking footage looks like a scene out of a fictional apocalypse movie, until it's not, but very much real of what happened in Alta, Northern Norway on Wednesday, June 3. The video is going viral and people cannot help but related to all that's going wrong in 2020. World's Largest Free-flying American Flag Gets Torn in Half Following a Thunderstorm in Wisconsin, Netizens Call it Symbolic of Current Times.

Buildings and farmhouses swept into the sea with a huge mudslide in Norway following heavy rains. As reported in Forbes, the landslide of more than 2,000 feet wide and 500 feet high occurred on the western side of Kråkneset. While there were no deaths, a dog named Raya also swept in and has been rescued. A rescue operation was immediately launched to evacuate and access damage by air and sea. Resident Jan Egil Bakkeby was lucky enough to evacuate from his home and reach a hill. He filmed the shocking scene of the land sweeping into the water. The video was shared on Twitter and it has shocked everyone. Coming to the point of how the year 2020 is turning out, the video has garnered more such reactions.

The video has got close to 2.5 million views and the footage has terrified netizens. Check some of the reactions.

Mother Earth Taking Away Her Land

This is why I say nobody truly owns land. Mother Earth owns it and can take it whenever and however she pleases.

The houses are returning to the sea. Nature is healing

A dog that was stuck managed to swim back to the shore. Video of the pooch has also been shared online and people are loving it.

Watch Video of the Dog:

The only victim caught up in the enormous mudslide in Norway was this dog, who swam to shore and is fine https://t.co/zHmQv6H9Ts pic.twitter.com/EiDE9BOnVx

Many of the buildings that swept away were holiday homes. As per local media smaller landslides had occurred hours before the major incident. Officials have searched the region and do not believe that anyone else is missing from the disaster. Thankfully, there have been no loss of life but a huge loss of property.

(The above story first appeared on LatestLY on Jun 04, 2020 06:15 PM IST. For more news and updates on politics, world, sports, entertainment and lifestyle, log on to our website latestly.com).