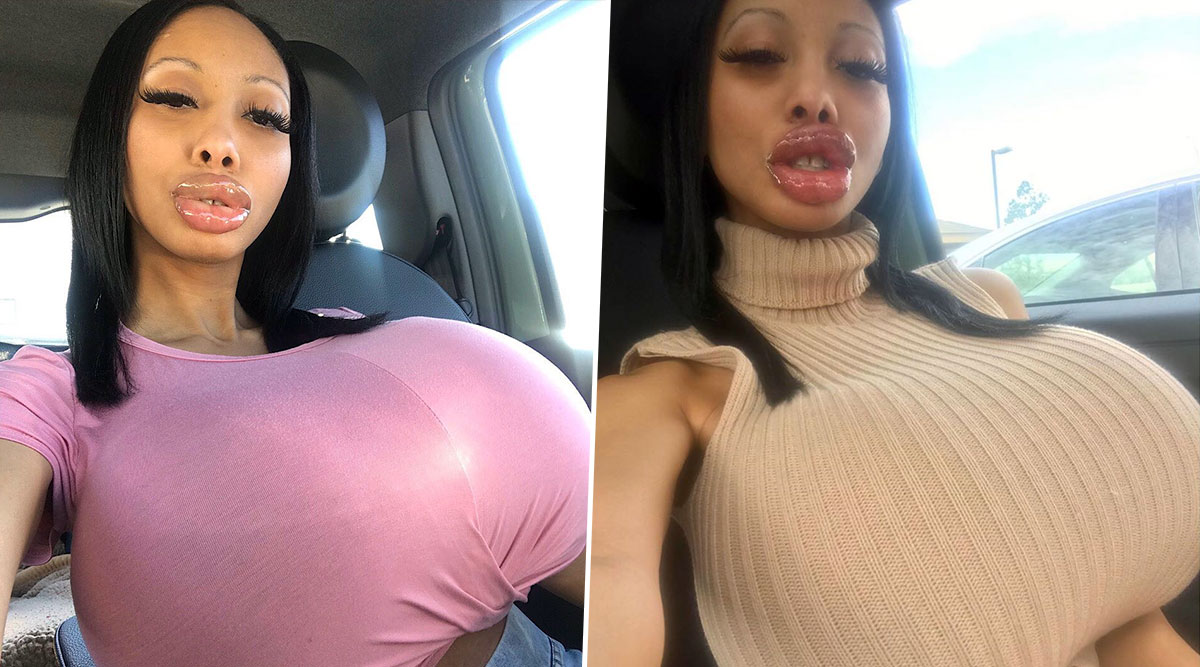 Breast implants and butt lift surgeries have become one of the most popular body enhancement surgeries after minor ones like liposuction and nose jobs. Fillers, implants and other invasive, semi-invasive surgeries are being opted for by most women these days. While there are many registered clinics that provide with the services, there is no shortage of unregulated, unlicensed services as well. People are ready to pay exorbitant about to get in their desired shape. However, on Las Vegas-based influencer and spent a whopping £170,000(1,54,35,163 Indian Rupee) for extreme 3600cc breast implants. This is not the first time for the 25-year-old Ruby Doll has opted for implants. The fetish model enhanced her 34A cup boobs with massive 550cc implants inserted into her breasts. Cooking Oil Injected into Woman's Butt Who Is Now Fighting for Life After Bum Lift Goes Horribly Wrong!

However, now she has gotten breast implants of a humongous 3600cc done. This is not it, the cam girl has also tried lip fillers and eyelid surgery. She wishes to look like "futuristic bimbo" and said to the Daily Star, "I've always been into hyper-feminine, extreme beauty and I've loved the look of gravity-defying breasts ever since I was younger. I don't try to emulate anyone's look. That being said, a lot of my aesthetic taste is interlinked with a futuristic bimbo aesthetic." She further said, "For the past five years, I've had one breast augmentation done each year. This has brought me from a starting point of a set of 550cc implants all the way to having reached my current goal of 3600cc implants." Swedish Woman's Breast Implants Fall off Her Chest After a Botched-Up Boob Job from a Celebrity-Endorsed Clinic in Turkey.

Here's a Picture of Her:

Ruby also told the esteemed media portal that she has no sugar daddies and is funding her implants by working as a fetish model and cam girl. She says, "I've never had a sponsor and I'm not into the sugar daddy game. I've had success in the stripping and camming world in the past. Now, I've got experience in 'Findom' (financial domination) and online fetish content." Woman's Butt Looks like She Is Wearing a 'Nappy' After a Botched-Up Butt Implant That Cost Her £15,000; Now Locked Down due to Corona.

Another One Of Ruby's Picture:

The cam girl and Instagram fame says that she loves her fans who are so supportive of her plastic surgeries.  She says, "I've acquired a loving online fan-base that is so supportive. They are like an extended family to me. I get plenty of positive comments on my look from people of all backgrounds, age groups, and lifestyles. The men that are attracted to me are very respectful in their comments." Breast Implant Unsafe? USFDA Re-Examines Safety Concern, as Women Complain of Problems Post Surgery.

Ruby doesn't want to stop here. She is planning that in the coming years, she wants a butt implant also get a bigger breast implant. She said to The Daily Star "In the future, I'm planning to get a medium-sized butt implant and a Brazilian butt lift procedure. I’d also considering increasing my implants to 4600cc."