Locust Attack in Gurugram Prompts Meme-Fest Online, These Funny Jokes Will Make You Smile Your Worries Away About Tiddi Dal Invasion 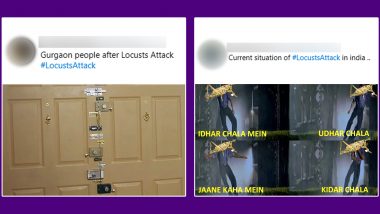 Residents of Gurgaon have uncalled visitors of locust swarms this morning. A large number of locust swarms have entered the city premises and locals took to social media to share pictures and videos of the same. The videos are definitely scary to look at but to ease your tensions, netizens are out to help with some humour. As #LocustAttacks became among the top trends with videos and photos of the Tiddi Dal invasion, some netizens joined in to make some funny memes and jokes of the situation. It is not the first time we have seen this approach, but if you or your friends are worried about the recent locust attack, you can definitely share these memes and jokes to help them smile. Locust Attack: Delhi ATC Asks Pilots of All Airlines to Take Precautions During Landing & Take Off As Tiddi Dal Spotted Near Airport Along Gurugram-Dwarka Expressway.

Locust attacks have been seen in the country from the last month and a half. States of Rajasthan, Madhya Pradesh, Haryana, Uttar Pradesh, Maharashtra have recorded these swarms coming in and destroying crops. Rajasthan is among the worst affected regions with the Tiddi Dal invasion. Authorities have planned different measures like spraying pesticides using helicopters and drones to drive away these insects. While these desert locusts are known to target the farms and surrounding regions, Gurugram residents were in for a not so pleasant surprise this morning. Videos of swarms in the city in large numbers were shared online. Following these, there were funny memes and jokes on locusts which will help you ease your worries.

If Locusts Had a Song...

People in Noida and Delhi RN

People in Noida and Delhi : pic.twitter.com/lrDd5qRJnM

The locusts have reached the Gurugram-Delhi border and thus people have been warned in Delhi NCR to keep their windows and doors shut. You can share these memes and jokes online to spread smiles so that people do not stay too worried about these insects.

(The above story first appeared on LatestLY on Jun 27, 2020 01:45 PM IST. For more news and updates on politics, world, sports, entertainment and lifestyle, log on to our website latestly.com).