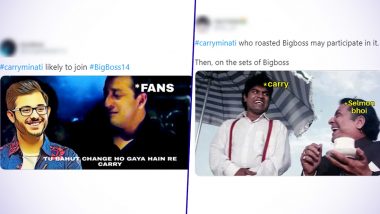 Bigg Boss 14 has been announced and it looks like CarryMinati, known for roasting people is set to be a part of the Salman Khan show. And as expected, social media is overflowing with funny CarryMinati memes and jokes. While the list of contestants hasn't been revealed but speculations are that YouTube sensation CarryMinati aka Ajey Nagar will be a part of it. Reports say that he has reached Mumbai and is currently being quarantined. It is said that CarryMinati will join Bigg Boss 14 team after completing his mandatory quarantine period of 14 days. Fans cannot help but share hilarious memes and jokes because he has been known to troll the reality show on various occasions. Fans of CarryMinati are happy but are also taking a sarcastic dig at the YouTuber because on several occasions he has trolled things that have happened at the Bigg Boss house. Bigg Boss 14: CarryMinati aka Ajey Nagar to Be Part of Salman Khan’s Controversial Reality TV Show?

CarryMinati shot up to fame particularly this year after he made headlines with his popular YouTube vs TikTok video roast video attacking TikTokers for their "cringe" content on the Chinese app. The video had raked millions of views however, it was taken down from YouTube due to content violation. However, now that he is joining Bigg Boss, fans are reminding him of the time he would criticise the content from Salman Khan's drama-filled reality show. You have to check out the best CarryMinati on Bigg Boss 14 memes and jokes:

#carryminati who roasted Bigboss may participate in it.

Then, on the sets of Bigboss pic.twitter.com/wRc3hvYWj3

Social media star #carryminati to be on Bigg Boss 14

When you started supporting #carryminati for roasting big boss but now he himself is going to be part of it. pic.twitter.com/4KmyXIs9fK

#carryminati in bigboss 14 with 3 other youtubers. @CarryMinati pic.twitter.com/gxoe2Es9Uc

There Has to Be a Hera Pheri Meme

*when you roast Bigg Boss whole year and now joining them*

CarryMinati's YouTube vs TikTok against TikToker Amir Siddiqui is still fresh on people's mind. Ajey Nagar aka CarryMinati roasted Amir and other TikTokers for their "cringe" content, body language, outfits, etc. Now that he is said to be joining Bigg Boss, we are to see how well does he take the drama in the house.

(The above story first appeared on LatestLY on Sep 16, 2020 09:34 AM IST. For more news and updates on politics, world, sports, entertainment and lifestyle, log on to our website latestly.com).