Google is celebrating Marsha P Johnson, an American gay liberation activist and self-identified drag queen. She was born as Malcolm Michaels Jr. on August 24, 1945, in New Jersey. She changed her name to Marsha P. Johnson with her middle initial 'P' allegedly stood for her response to those who questioned her gender: 'Pay It No Mind.' 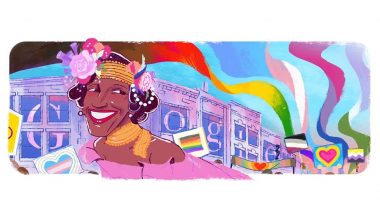 On the last day of Pride month, Google is celebrating Marsha P Johnson, an American gay liberation activist and self-identified drag queen. The gay rights activist was born as Malcolm Michaels Jr. on August 24, 1945, in New Jersey. She legally changed her name to Marsha P. Johnson after 1963 when she moved to New York City’s Greenwich Village post-graduation. Her middle initial—'P.'—allegedly stood for her response to those who questioned her gender: 'Pay It No Mind.' Taiwan Celebrates Annual LGBT Pride March, Taipei Becomes World’s Only City to Hold Public Parade During COVID-19 Pandemic (See Pictures and Videos)

Marsha is credited for being the pioneers of the LGBTQ+rights movement in the US. On June 30 2019, Marsha was posthumously honoured as a grand marshal of the New York City Pride March. It is one of the largest annual Pride marches in the world that attracts tens of thousands of participants and millions of sidewalk spectators. This year the event was cancelled due to COVID-19 pandemic. Marsha was one of the prominent figures in the Stonewall uprising of 1969.

Her contribution to supporting the LGBTQ+ community is regarded as the turning point for the international LGBTQ+ rights movement. She founded the Street Transvestite (now Transgender) Action Revolutionaries (STAR) with fellow transgender activist Sylvia Rivera. STAR was the first organisation in the United States to be led by a trans woman of colour and was the first to open North America's first shelter for LGBTQ+ youth. In honour of transgender people, New York City announced plans to erect statues of Johnson and Rivera in Greenwich Village. It will be the first of its kind monuments in the world. This Google Doodle was illustrated by Los Angeles-based guest artist Rob Gilliam. Pride Day 2020 Date: History, Significance and Celebrations to Observe This Revolutionary Day, Marking the Start of LGBT Pride Month in June.

Elle Hearns, founder of the Marsha P Johnson Institute, an organization dedicated to the cause of justice for Black transgender people is quite excited that many people will be learning about Johnson for the first time through this doodle today. Talking about the doodle Elle said, "For so long, Marsha’s history has only been heralded by the LGBTQ community. Today’s Doodle will help teach her story to many more around the world, and about the work that has been historically ignored and often purposely left out of history books. Today’s Doodle of Marsha reminds people that Black and LGBTQ+ history is bigger than just a month; it is something to be honoured every single day."

(The above story first appeared on LatestLY on Jun 30, 2020 08:44 AM IST. For more news and updates on politics, world, sports, entertainment and lifestyle, log on to our website latestly.com).