1,25,000 postcards with messages on climate change sent by young people around the world were used in the postcard. 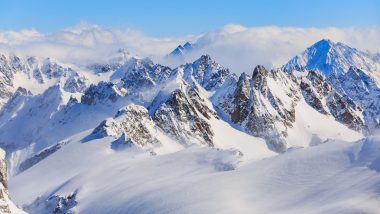 Melting of glaciers is one of the drastic effects on global warming on earth. Among the glaciers disappearing every year is Switzerland's Aletsch where the mountains are losing upto 12 meters of ice a year. As the shrinkage continues, a postcard measuring 2,500 square metres was laid out in the snow in the Swiss Alps, at an altitude of 3,400 metres to create awareness about the ever-increasing problem.

WAVE Foundation, which organised the event in cooperation with Swiss authorities said that the event aims to "boost a global youth climate movement ahead of the next global climate conference (COP24) in Poland" next month. 1,25,000 postcards with messages on climate change sent by young people around the world were used in the postcard. They were assembled around 3,400 meters on Jungfraufirn of the Aletsch glacier. Earth Will Reach 1.5 Degrees Celsius Threshold by 2030, Risk of Natural Calamities Gets Higher: IPCC Report

Here is the postcard:

The event smashed the earlier 16,000 card record entering setting a new Guinness World Records. Swiss Agency for Development and Cooperation (SDC) in a statement said, "Children and young people have a key role to play if (the 1.5C) goal is to be achieved, both as generations that will suffer from the consequences of climate change for a long time and as a force for concrete action."

SDC said to commemorate the Guinness World Records "a postcard will be designed and printed to dispatch the young people's words to the four corners of the globe". It said some of the postcards would be sent from the world's highest post box on the Jungfraujoch peak to participants in the COP24.

It was organised by the Swiss government's Agency for Development and Cooperation among other groups, includes the message 'WE ARE THE FUTURE GIVE US A CHANCE'. Another message on the snow read: 'STOP GLOBAL WARMING #1.5 DEGREES C'. It refers to the United Nations' report released last month which states that if immediate action is not taken to control the global warming at 1.5°C, then it would rise to 2°C leading to rising in global sea level, loss of all coral-reefs and critical food shortages.

(The above story first appeared on LatestLY on Nov 19, 2018 02:58 PM IST. For more news and updates on politics, world, sports, entertainment and lifestyle, log on to our website latestly.com).