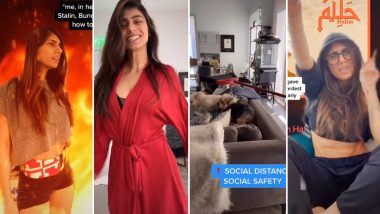 But we're glad that Mia Khalifa is providing such funny and woke content to her fans. Take a look at some of her popular TikTok videos:

@miakhalifaGen Z has my creativity working overtime to keep up 😩😭 THANK U @toenailcrust69 and ##justiceformia. Y’all are my trauma’s silver lining 🌦🥺♥️♬ original sound - miakhalifa

Mia Khalifa Shared Her Nose Job News With her fans

@miakhalifaI’d never hide behind a tree. Don’t compare urself to anyone on the internet, ur beautiful ♥️ THANK U, @deepakdugarmd. U changed my life! ##ShaveItOff♬ original sound - makayladid

@miakhalifaBoys like this exists, you just gotta go to Sweden to find them 😭😩♥️♬ original sound - miakhalifa

Mia Khalifa on What Could Have Been Her Wedding Day

(The above story first appeared on LatestLY on Jun 30, 2020 04:18 PM IST. For more news and updates on politics, world, sports, entertainment and lifestyle, log on to our website latestly.com).