In a long Twitter thread, Mia Khalifa explained her ordeal and it will send chills to anyone's spine if you have been deceived to be abused sexually. She started of how she never spoke about it before because of the fear of being "derided" by the public. 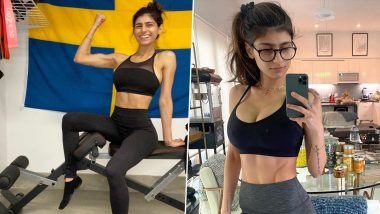 Mia Khalifa Reveals Chilling Secrets From The Time Her Famous Hijab Video Went Viral and How She Was Sexually Exploited by 'Vogue Photographer' and Bang Bros (Photo Credits: Instagram)

She revealed she was taken to the "roof of the building (industrial and barely accessible) ALONE with him." She said,"I was handed a hijab, & two replica semi-automatic rifles. Following his orders, I put it on and posed for the photos the way he wanted, while he made physical corrections on my body." Mia Khalifa further said that, "His posing orders quickly scaled from provocative to salacious, but again, I was too afraid to say anything. “What if it IS for Vogue? What if he gets mad? What if he pushes you off the roof?” Was the chorus in my head. I didn’t know this man, and I was scared to my core." Mia Khalifa's TikTok Videos Are Both Funny & HOT! Here's How the Pornhub Queen Is Spending Her Time in Quarantine.

The photographer then convinced her to take more shots because of the lights and said asked her to take "off the hijab" and her "underwear" to pose against a wall. She said, "I know it might be easy for you to say “you had sex on camera, what’s the big deal?” But you need to understand the level of fear a woman has when she feels powerless" Explaining how appalled she was she said, "I dissociated. Instantly. I was fucking terrified. I felt cheap and used, powerless and demeaned. When I wasn’t posing to his liking, he would physically correct me and contort my body until he was satisfied. I wanted to scream and cry and to claw his face off with my bare hands all at the same time." Mia Khalifa Wants Her Porn Videos To Be Removed From The Internet, Unfortunately It's Impossible.

I’ve never spoken about this because I was made to feel as though I couldn’t tell my story without being derided by the general public.

I feel safe now, and I also feel the need to unload some things that have haunted me during my brief stint in the industry.

She further gave away chilling description of how she was sexually abused. She said, "The worst part of it was when he moved his hands over my breasts telling me how nice they were. I still feel the cold metal from his rings in a shiver down my spine." She also said that to he the man was "sexually ambiguous." She said how unsafe she felt and how it "utterly crushes me, was the indignity of it."  "I was too young to realize at the time, but these men, all of them, collectively and consciously chose to deceive me", she said . "weeks later, those photos ended up being used on the website BangBros created under my name. Which I owned the domain for before they, again, deceived me into selling to them for $1." She said she  "was a pawn to them" and they never saw her "as a human being with a soul and a future." She also revealed that they "trafficked" her "into the hands of this man with no supervision or regards for my safety." She was also not paid for that shoot and neither was she informed what it would be used for.

(The above story first appeared on LatestLY on Jun 25, 2020 07:25 PM IST. For more news and updates on politics, world, sports, entertainment and lifestyle, log on to our website latestly.com).