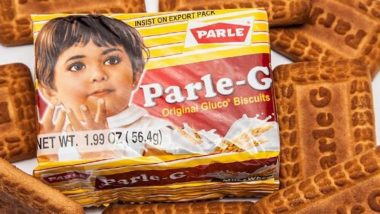 New Delhi, June 9: In the midst of the lockdown, when there are companies that have reported zero sales and few have shut down, Parle-G has achieved a unique milestone of selling the maximum number of biscuits during the lockdown. According to the Economic Times report, Parle-G confirmed that March, April and May have been the best months in over eight decades.

The overall market share of Parle Products has grown by almost 5 percent. The company attributes that 80-90 percent of this growth has come from Parle-G sales. During the lockdown period, the company focussed on selling its best selling product priced at Rs 5. D-Mart Founder Radhakishan Damani Only Indian Billionaire Whose Net Worth Surged 5% in 2020 to $10.2 Billion Amid Coronavirus Outbreak.

Netizens celebrated Parle-G's unique milestone by sharing their memorable moment with the biscuit. #ParleG was soon trending on Twitter on Tuesday and people also shared memes around it.

Parle-G not just a biscuit, but an emotion, say Twitterati

Parle-G is not just a biscuit, its an emotion,, thats y its still longing till now. It has marked the best sales value from past 82yrs i.e 8 decades. pic.twitter.com/piGl9w9wGk

My whole career is feuled by chai and Parle-G since theater days.. Can you imagine how much less single use plastic waste there will be if just Parle-G changed its packing to an alternate biodegradable material? Now the sales are up let’s see the contribution to a better Tom too pic.twitter.com/mHdZhbr7X9

Here's a meme which is being shared

Ps - I fall under legends 🙈

While watching something my mid night cravings parle-g with water https://t.co/jW56uKxEmT

Over the last few months, we have seen thousands of migrants forced to walk all the way to their hometowns, crossing state borders in the middle of the lockdown. They were forced to take such a step after were rendered jobless. All that these migrants could afford at that point in time was a Rs 5 Parle-G biscuit packet. There were several good Samaritan who purchased these biscuits in bulk and distributed to the migrants on their way to their hometown.

(The above story first appeared on LatestLY on Jun 09, 2020 01:17 PM IST. For more news and updates on politics, world, sports, entertainment and lifestyle, log on to our website latestly.com).