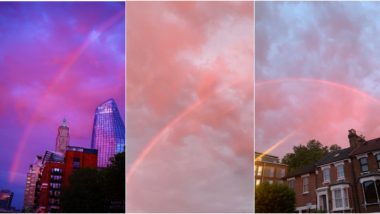 Have you ever seen a pink rainbow? Well, we are not talking about the book on the imaginary world. London saw one the rarest of nature's beauty on Friday evening. Pink candyfloss clouds floated across the skies spreading the hue to the air and there emerged a pretty rainbow in pink! Pictures of the pink rainbow have flooded social media platforms with Twitterati having a hard time believing nature's stunning show. Videos of pink London has also been shared by celebrities also. Bollywood actor Mouni Roy also tweeted pictures herself posing in the rainbow-lit sky on Twitter. ICC Posts Stunning Pictures of Matches Held Under Rainbows, Breathtaking Snaps of the Stadium Leave Netizens Awestruck (See Tweets)

While rainbows itself are a rarity, the seven-coloured beauty appearing in pink is just unbelievable. Rainbow is a phenomenon that occurs due to refraction, reflections and dispersion of light. They generally appear when there is a slight after a rain shower. They emerge in seven colours called the VIBGYOR that are violet, indigo, blue, green, yellow, orange and red. But the recent one in London appears in pink for a reason.

A Sight to Behold!

London like I’ve never seen it. Double pink rainbow at sunset, in the merry company of the inimitable @tuhfatulhind pic.twitter.com/vsFGJyU9Zb

Right Out of a Painting!

As well as the astonishing sunset in London last night, there was a rainbow. One of the most otherworldly things I’ve ever seen. No filter, the different colours are from adjusting light levels on my camera phone. pic.twitter.com/UPhm0YkuxX

Too Pink to be True!

The sky at times appears changes colours during sunset from orange to pink and red due to the way in which sunlight refracts in the atmosphere. But, when the sun is low in the sky, it has to go through the atmosphere. During this time, shorter wavelengths of light like the blues, greens and the violets get scattered making the reds and oranges visible to naked eye. We see rainbows because the light in the atmosphere is scattered by water droplets. Now it appeared pink due to the absence of white light in the sky. When the rays passed through water drops in the air, it was flooded with pink light. So instead of showing off all the colours, the rainbow formed in pink.

(The above story first appeared on LatestLY on Aug 01, 2020 07:11 PM IST. For more news and updates on politics, world, sports, entertainment and lifestyle, log on to our website latestly.com).