Fondly, known as the Missile Man, Twitter is filled with wishes and messages remembering one of the great leaders that the country has ever had. Amid the birthday wishes, a unique yet influential hashtag is trending on Twitter accompanying ‘Plant for Kalam.’ 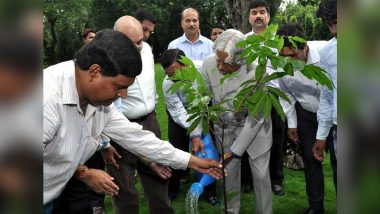 The birth anniversary of Dr APJ Abdul Kalam is a significant event for people in India. Massive functions and gatherings are being held across the country paying homage to the former President. Fondly, known as the Missile Man, Twitter is filled with wishes and messages remembering one of the great leaders that the country has ever had. Amid the birthday wishes, a unique yet influential hashtag is trending on Twitter accompanying ‘Plant for Kalam.’ People are posting pictures of themselves planting trees, as a small step towards protecting nature. APJ Abdul Kalam’s 88th Birth Anniversary: Twitter Fondly Remembers the Missile Man of India With Heart-Warming Quotes & Messages.

Apart from being a great leader and the nation’s favourite teacher, Dr APJ Abdul Kalam, was also the first Paryavaran Ambassador by the Children of India. The campaign was held across 200,000 schools in the country. Hence, ‘Plant for Kalam,’ stands as a significant step. The move was initiated by Tamilian actor, Vivekh. On October 14, just a day ahead of Kalam’s birthday, Vivekh tweeted, “I wish all the Thalaivar/ Thala/ Thalapathy Commander / Dala (or any other celebrities we love) fans to plant a tree on the occasion of the birth anniversary of Bharat Ratna Kalam,” (translated from Tamil). Top 10 Quotes of Late Former President of India, APJ Abdul Kalam.

Responding to Vivekh’s initiative, fans, celebrities and other famous faces have joined in, posting pictures of the trees being planted across Tamil Nadu.

Together let’s pledge to make the world a better place, one sapling at a time. 🍃 #plantforkalam pic.twitter.com/1AQNcytjIu

Started the plantation and in this #APJAbdulKalam ayya birthday I have given birth to planting agriculture .#plantforkalam .. as told by #nammalwar ayya planted tomato and omavalli pic.twitter.com/6H30ZU180M

Dr APJ Abdul Kalam was fondly called as ‘People’s President.’ He preferred to refer him as a teacher first than anything else. Not only working towards the development of the country, but Kalam has also influenced the nationals in many ways and by teaching them the importance of education. His great works have made him a recipient of several prestigious awards including the Bharat Ratna, which is India’s highest civilian honour.

(The above story first appeared on LatestLY on Oct 15, 2019 12:01 PM IST. For more news and updates on politics, world, sports, entertainment and lifestyle, log on to our website latestly.com).