Pre-Wedding Photoshoot Shows a Suicide Scene Between To-Be Husband and Wife, Angry Netizens Slam The Idea for Mocking Such a Serious Issue 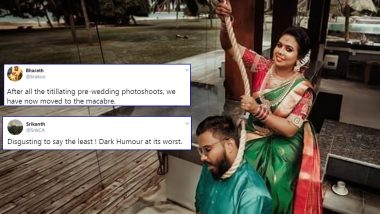 Pre-wedding shoots have become quite a trend and every couple wants their pictures to stand out than others. With almost every couple opting for clicking pictures of themselves to make the 'Save The Date' cards and wedding invites, there are so many concepts that have been tried out before, some funny, some straight out film scenes. A photo of a couple from a pre-wedding shoot is going viral and the concept is highly disturbing. It shows a noose hanging around the man, while the woman is holding it. The idea has disgusted everyone and people are slamming it. Couple’s ‘Dirty’ Photoshoot in Mud Goes Viral, Netizens Question If Its a Pre or Post Wedding Shoot! See Viral Pics.

The picture from the pre-wedding shoot by a Twitter user named Bharath who rightly called it macabre in the caption. It is a save the date card with the to-be husband apparently playing "dead" with his to-be wife holding the noose around him! The concept itself is utterly disturbing if there was any to it. With so many talks about mental health, depression and suicide on the social media space in the past few weeks, this picture doesn't hit a chord. Netizens have slammed the idea of whoever decided to make suicide a concept of a pre-wedding shoot.

After all the titillating pre-wedding photoshoots, we have now moved to the macabre. pic.twitter.com/EK1Rlp4jen

Disgusting to say the least ! Dark Humour at its worst.

Its funnu because the noose is around the husbands neck. Imagine the outrage had it been other way around.

This is so tasteless and shocking! https://t.co/y2UsMUCS1o

What on earth is this ? mocking suicide ?? Sick photographer and very very sick couple. This should be reported. https://t.co/6RzKJaL9L8

We have some funniest ideas of such shoots going viral, but this is clearly not funny. It mocks the serious issue of suicide, also projecting the institution of marriage in a wrong light as some people pointed out. We wonder, who even thought of an idea like it and the couple even agreeing to choose such a picture to make "Save the Date."

(The above story first appeared on LatestLY on Jun 29, 2020 06:30 PM IST. For more news and updates on politics, world, sports, entertainment and lifestyle, log on to our website latestly.com).