Prison Party! US and British Tourists Caught Drinking Beers and Dancing Inside Thailand Police Station After Being Arrested For Flouting COVID-19 Restrictions

Around 200 people, including travellers from the US, UK, Australia and Denmark was partying at a bar during the curfew time in Thailand. A number of revellers managed to escape the scene, but some 110 people were arrested. 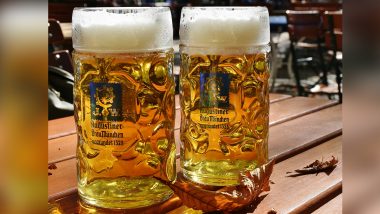 You say prison, we say party—this is what the tourists in Thailand must had in mind when they were arrested for flouting COVID-19 restrictions. According to reports, around 200 people, including travellers from the US, UK, Australia and Denmark were partying at a bar during the curfew time in the Southeast Asian country. About 89 tourists and 22 Thais were detained for breaking COVID-19 rules. However, after being arrested, the revellers were then caught drinking beers and dancing inside the police station. Pictures and videos show the backpackers ignoring social distancing rules and enjoying their time partying, while investigations were on. Shocking Video From Pub Shows COVIDIOT Revellers Throwing Caution and COVID-19 Norms to the Wind.

Due to the COVID-19 pandemic, bars are not allowed to open past 9 pm, and police raided the party just after the curfew was supposed to have started. The police on the island of Koh Phangan stormed the Three Sixty Bar. Among the locals arrested was the bar’s owner and another who sold drinks there. A number of revellers managed to escape the scene, without punishment. However, some 110 people were arrested. They drank, and danced inside the police station, without following social distancing guidelines, while the case was processed. Huge Crowds Spill Out of Pubs and Gather for ‘Impromptu Party’ in UK Streets Followed by New COVID-19 Restrictions.

Video footages appeared on the internet, which captured backpackers lounging on tables, smoking, playing music and ignoring social distancing rules. Those who arrested were reportedly from more than ten countries, including the US, Britain, Switzerland and Denmark. You can watch the videos and photos by clicking HERE.

Koh Phangan in Surat Thani province is a famous destination for young backpacking crowd and is known especially for its all-night beach parties. Thailand saw its cases surge in December, which caused officials to implement stricter coronavirus regulations from this month. All establishments must close by 9:00 pm, and bars and nightclubs are reportedly shut in high-risk areas. As per reports, the penalty for violating the state of emergency is up to two years’ imprisonment and a fine of up to 40,000 baht (more than INR 97,000).

(The above story first appeared on LatestLY on Jan 28, 2021 05:26 PM IST. For more news and updates on politics, world, sports, entertainment and lifestyle, log on to our website latestly.com).