PUBG Saves Kerala Couple's Marriage From Being Called off; Here's Their Story 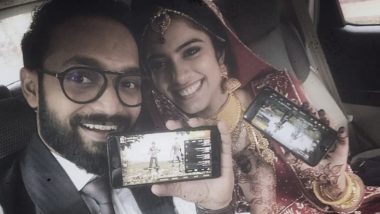 While some are trying to get rid of popular game PUBG or PlayerUnknown's Battlegrounds in India, others are getting married due to it. Although it is addictive, a Kerala couple claims that the video game brought them closer and even saved their marriage from being called off. Photo of a newly married couple has been going viral on social media since August. Mohammed Rasheen shared the photo of him and his wife Salwa Ahamed in their wedding attire sitting inside a car holding phones with PUBG screens. The caption of the photo reads: 'Finally married my PUBG squad mate'. While people came u up different theories about the photo, finally the story behind the photo has been revealed.

Salwa Ahamed told News 18, "We didn't actually meet over PUBG It did, however, save our marriage which was going to be called off." The duo knew each other for four years during which Rasheen was addicted to gaming. While Salwa didn't play much Rasheen spent hours together on it. When she was in the final year of college, Rasheen got a job in the UAE and moved. The long-distance created problems and they decided to call off the wedding. PUBG Addict Hangs Himself in Kurla After Argument With Family Over Buying Smartphone.

However, things began to improve with the arrival of PUBG. When Voice over IP(VOIP) calls, Skype and Whatsapp were blocked in UAE, PUBG helped them communicate. They thus began talking again and eventually, the marriage happened in Kerala. The couple didn't know that the photo had gone viral and was informed by their cousins. Rasheen is an architect in UAE, and Salwa works as an IT security professional. She said, "Both of us still love gaming. It's the process of playing together, that we love, winning chicken dinner is just the added bonus if we win." PUBG, Fortnite Unstoppable! Despite PM Modi’s Advice, Online Games Likely to Remain Hit Among Indian Youth.

Meanwhile, with children increasingly spending more time playing the game, the Gujarat government has issued a directive various primary school to ban PUBG in school premises. As Jammu and Kashmir Students Association requested the governor to ban PUBG in the state as it may affect Jammu and Kashmir State Board of School Education (JKBOSE) Class 10 and 12 exam results.

(The above story first appeared on LatestLY on Feb 14, 2019 07:52 PM IST. For more news and updates on politics, world, sports, entertainment and lifestyle, log on to our website latestly.com).