Not only the teachers but women from other professions also joined in to support this social flashmob. Many teachers stripped off in protest. 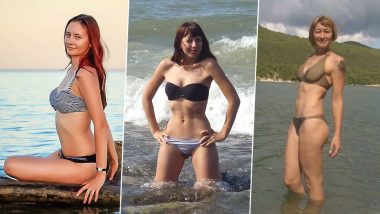 Women support women and a true example is this being shown on social media. A Russian teacher was asked to quit because she posted pictures of herself in a bikini on her social media account. Following this, now thousands of women have joined to post their bikini pictures in support of the woman. Under the Russian language hashtag #учителятожелюди which means 'Teachers are people too' there are more than 15,000 posts. And thanks to the power of the social media, 38-year-old Tatiana Kuvshinnikova, who was sacked is being called back to work. Teacher Fired For Refusing To Call Transgender Student By Male Pronouns.

Tatiana Kuvshinnikova, a fifth-grade school teacher in the city of Barnaul had posted a picture of herself in a swimming costume and a short dress. She has a hobby of winter swimming and she posted those pictures. But the school director told her she 'dressed like a prostitute' and provoked the male students to lust after her! One of the parents complained and she was told that she would stain the reputation of the school. Kuvshinnikova's colleagues also started giving her looks and she was forced to quit. But soon, the story made headlines and educators everywhere united in support of her. Women posted pictures of themselves in bikinis and spoke of a woman's personal life being different from her professional life.

More and more women joined in

Not only the teachers but women from other professions also joined in to support this social flashmob. Many teachers stripped off in protest. With more than 15,000 plus entries under the hashtag, the campaign was sure a success. Women urged parents to not poke in teachers' personal lives. Some questioned if teachers are a different race? Is Santa Real? US Teacher Loses Her Job Ahead of Christmas For Telling Children The Truth About Santa Claus.

The regional education minister took notice of the campaign and decided to intervene. He offered Kuvshinnikova with a new position and she has now secured a position of teacher in training college. In fact, she has been assigned to create a new course altogether.

(The above story first appeared on LatestLY on Apr 02, 2019 03:03 PM IST. For more news and updates on politics, world, sports, entertainment and lifestyle, log on to our website latestly.com).