A viral photo of a Flipkart delivery addressed to Salim Lala has left the internet in splits. But the image is fake. It is a photoshopped pic of the same one which went viral last year and was addressed to Udayveer Shaktawat. 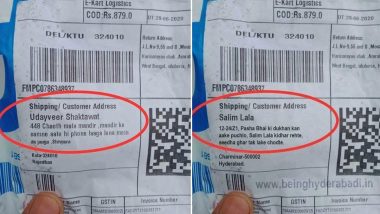 The internet was in splits when a viral photo of a Flipkart delivery address appeared on the internet. The pic in question is addressed to someone as ‘Salim Lala’, and instead of a full detailed address, the customer left instructions for the delivery executive—requesting that they reach a certain shop and ask for him. People online are laughing out loud, and reacting with funny memes and jokes. However, the image seems to be fake. It is a photoshopped pic of the same one which went viral last year for a similar reason—bizarre address. In this article, we will bring you the original photo of the Flipkart address that even the company had a hilarious take on.

In a world where we are highly equipped and have GPS service to navigate through roads, multiple directions or popular landmarks. However, for our country, the landmarks are mostly, ‘nukkad ki tapir,’ ‘pan dukan’ and in some cases, ‘mandir ke samne.’ And that is what was written to a Flipkart address—‘mandir ke samne aate hi phone laga lena, mein aa jauga,” (call me once you reach the temple, I will come and collect it). Yes, it happens only in India! It was addressed to Kota, Rajasthan. The image went hilariously viral on Twitter last year. Flipkart too had a hilarious take on the address.

Much to your disappointment, the image is photoshopped. Except for the address and name, everything else is the same as of 2020’s viral Flipkart address, including details such as product code, return address, amount of package, and date.

In the world of social media, where almost anything can go viral, one needs to pay attention to even the smallest details, as more and more misleading photos take over the internet. However, in this case, it was a lighter note, and people had quite a laugh at the bizarre address, only it was photoshopped.

The image is photshopped. It is the same delivery package that went viral last year, addressed to Kota, Rajasthan

(The above story first appeared on LatestLY on Jan 16, 2021 01:56 PM IST. For more news and updates on politics, world, sports, entertainment and lifestyle, log on to our website latestly.com).