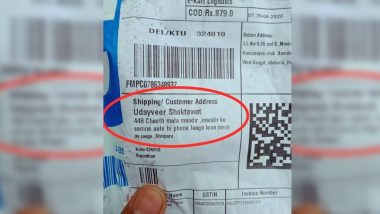 India, the land of variant cultures, traditions and festivals is also the land of hilarious circumstances at times that will tickle your funny bones. Especially when it comes to explaining an address, the struggle is real. Even though we are highly equipped and have GPS service to navigate through roads, multiple directions or popular landmarks are always needed to identify the place. And when it comes to our country, the landmarks are mostly, ‘nukkad ki tapri,’ ‘pan dukan,’ or in some cases, ‘mandir,’ is how we tend to explain the delivery person about the address. Similarly, an address on a Flipkart package delivery is making rounds on the internet. The photo shows the address that reads, “mandir ke samne aate hi phone laga lena, mein aa jauga,” (call me once you reach near the temple, I will come to collect it). Yes, such instance can only happen in India, and the viral photo is leaving netizens in splits. Even Flipkart had a hilarious take on the address and their tweet reading, “Ghar ek Mandir Hai,” is a must-see! People Share Hilarious Things They Are Bad At, Funny Tweets Will Make You ROFL.

It may sound hilarious, but we all know that guiding our delivery guy to the nearest landmark is at times a task. They tend to get confused. The unidentified man’s innovative way has caught the internet’s attention. And why not, after all, this is how we usually explain our address to the delivery guy, when they call us. Instead of his full address, the chose to write, “Mandir Ke Samne Aate Hi Phone Laga Lena, Mein Aa Jaunga,” on the Flipkart package. Naturally, it went viral, making netizens cry out of laughter. Twitter user Mangesh Panditrao shared the picture. #StayAwayFromPeopleWho Trends on Twitter With Netizens Avoiding Toxic Situations, Check Funny Tweets.

Even Flipkart Was Impressed!

Netizens Were Quick to React!

In early 2000s I was very skeptical about Maps ever working in India. Amazing how it has worked out over the years. More hopeful about self-driving cars now :).

Because, we are different.. pic.twitter.com/FFYMjGNv5H

😂this gentleman is living a complete bhagwan bharose zindagi !😂

According to media reports, the picture first appeared on Reddit, before it went viral on other social media platforms. We must admit the man is a genius. The whole incident left the netizens in splits for obvious reason. Well, such uniqueness in explaining address can only be seen in our country. Don’t you agree?

(The above story first appeared on LatestLY on Jul 10, 2020 04:53 PM IST. For more news and updates on politics, world, sports, entertainment and lifestyle, log on to our website latestly.com).