Shammi Kapoor, Dharmendra, Asha Parekh's Vintage Autographed Pictures And Letters To Fans Are Going Viral Thanks To This Twitter Thread

There was a time when fans used to write letters to wish actors on their birthdays and request for autographed photos. Those were also the times when stars used to reply with hand-written notes to their fans. Reviving those memories, a Twitter user shared a few of these memorabilia and we are glad. 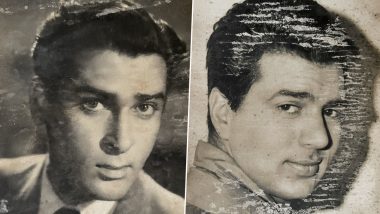 A Twitter user started a thread of pictures that her aunt received from Bollywood actors from yesteryear and it is gaining popularity for all the right reasons. Those were the days when fans could write letters to their favourite superstar and even get replies from them. Just imagine a typed or at times hand-written letter from your favourite actor or actress reaching you via post. That's a feeling no amount of retweets or likes from stars can compensate. Hence, in no time, the thread went viral. On Shammi Kapoor’s Birth Anniversary, Lata Mangeshkar Recalls Late Actor’s Singing Skills

The Twitter user writes about her aunt, "As a young girl growing up in a small town in 1950s and 60s, she was completely enamored by movies. Much to the disapproval of her mother, she spent her free time writing fan mail to movie stars and over a time, built up quite a collection of autographed pictures and letters." The thread includes pictures of Shammi Kapoor, Asha Parekh, Sadhna, Dharmendra, Rajendra Kumar, Raaj Kumar and many more. They have even replied to her fan mails.

The pic is damaged but the good looks are intact!

This is one of the oldest pic of the lot and sadly damaged quite a bit. 6/n pic.twitter.com/nBpFssVMNW

He wrote her a long letter in Urdu which I can’t read!

An overwhelmed Saira Banu after a birthday wish

You can check the complete thread for more such pictures. If the autographed letters take you to a good time, the letters will make you miss those times dearly.

(The above story first appeared on LatestLY on Feb 25, 2021 03:15 PM IST. For more news and updates on politics, world, sports, entertainment and lifestyle, log on to our website latestly.com).