Locals beat a gigantic dolphin to death in Uttar Pradesh’s Pratapgarh district. According to reports, three people were arrested in connection with the case. Forest department had lodged an FIR. The incident took place last month. 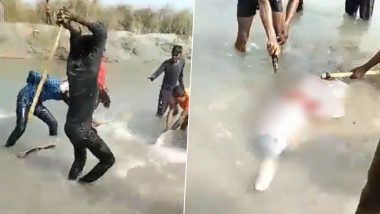 Pratapgarh, January 8: In an inhuman act, locals in Uttar Pradesh’s Pratapgarh district thrashed a gigantic dolphin to death. According to reports, three people have been arrested in connection with the case. Soon after the incident was reported, forest department sprung to action and lodged an FIR. Reports inform that the incident took place in the month of December 2020. The three culprits were booked for the horrific act on December 31. Humanity Blown Off! From Pregnant Elephant and Cow Fed With Explosives to Dog Dragged Behind Bike, Incidents of Animal Cruelty Prove We Deserve 2020.

People expressed anger after the shocking video of the incident surfaced on social media platforms. In the video, it could be seen that three to four people were beating the aquatic mammal with stick and axes. Meanwhile, some people are looking at the inhuman act as mere spectators. Blood could be seen coming out from dolphin’s body, and the animal was agonising in pain. The water of the river Ganga also turned red. Dog Thrashed Brutally by Security Guard in Mumbai's SNDT College, Succumbs to Injuries.

Here Is The Link Of The Video:

(The above story first appeared on LatestLY on Jan 08, 2021 03:05 PM IST. For more news and updates on politics, world, sports, entertainment and lifestyle, log on to our website latestly.com).