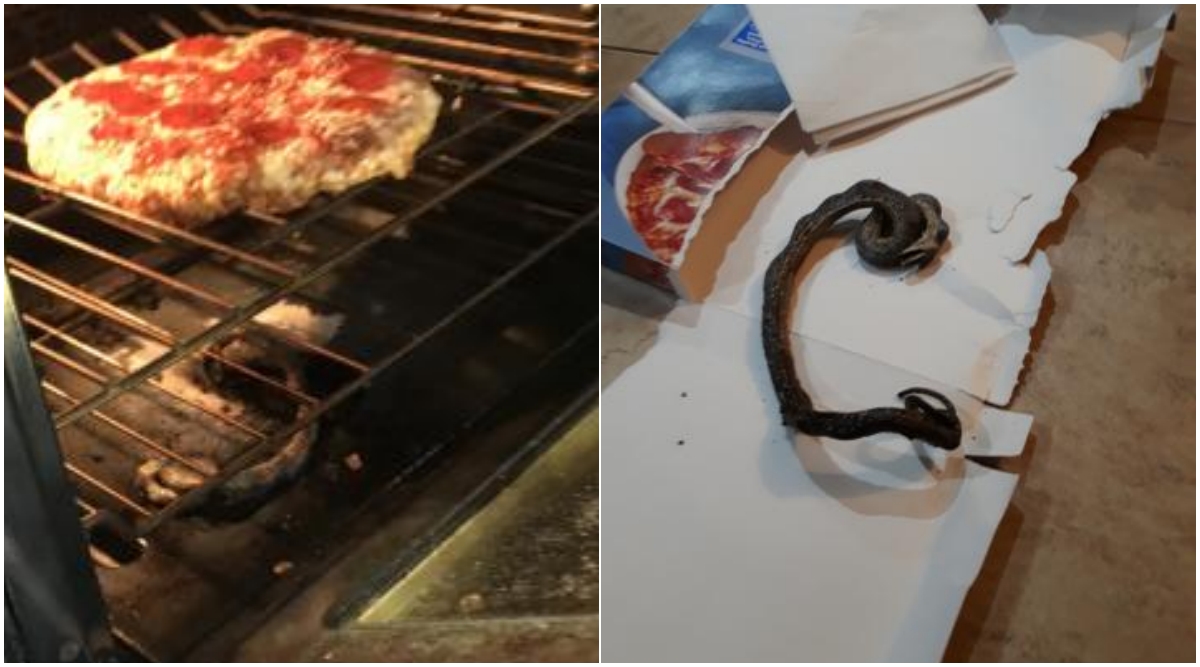 We have read about snakes being found in the most unlikely places but on or beneath a pizza? That'd be too much to even imagine. However, it became a reality for a family in North Carolina wanting to have pizza for dinner. The family's dinner plan to enjoy a pizza turned into a nightmare when they found a snake into their oven! Amber and Robert Helm were baking a pizza when their room filled up with smoke along with a disgusting smell. On opening the oven door, they found a small snake at the bottom of their oven! The reptile was charred to death from the heat. The pictures of the snake in the oven were shared online and are now going viral. Scared Brooksville Woman Rescues Snake With Head Stuck in Beer Can (Watch Video).

The incident took place this week when the Helm family decided to bake a frozen pizza for some easy dinner. They kept the oven on preheating and since they never store in anything, they did not even check inside. Soon, the kitchen was filled with smoke and some foul smell. By then Amber already told her family members' for a backup as they feared some fire. But when they opened the oven, they were in shock on spotting a dead snake inside! "I looked closely and was like ‘Oh my God! That’s a friggin’ snake," said Amber in a report to WRAL TV. The husband Robert added, "I was queasy and it was creepy … [The smell was] not good,” Robert said. “Nobody likes snakes and nobody likes them when you find them burned in the oven." Snakes on The Loose! 5 Times Slithering Reptiles Gave People The Fright of Their Lives (Watch Video).

Check Pics of Snake in an Oven:

Anybody would freak out at the thought of having a dead snake and the family cancelled on eating pizza at all! They all went out to eat but ate something else. Meanwhile, Amber felt a little bad that they had killed the snake with the preheat. "I’m not happy about the way that the snake died," she was quoted in another report. The family is now planning to get in pest experts to come in an examine their house for other creepy crawlies and figure how did the snake end up inside the oven.