Spanish TV Reporter Quits Her Job Live on Air After Winning Lottery, Apologises After Realising That She Only Won a Small Amount (Watch Video)

Natalia Escudero thought she was the winner of the Spanish lottery, the biggest lottery in the world in terms of total prize money offered. But soon, Escudero was left red-faced after she realised that it was just a fraction of the jackpot that she had won—a small prize of about 4000 euros. 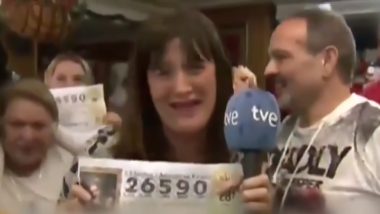 Uh Oh! This is why it is important to verify before you announce your big win to the world. Take a cue from this Spanish TV reporter, Natalia Escudero who thought she was the winner of the Spanish lottery, the biggest lottery in the world in terms of total prize money offered. She went a little extra by informing her colleagues, live on air that she would not be back at work the next day, while celebrating the lottery win. But soon, Escudero was left red-faced after she realised that it was just a fraction of the jackpot that she had won—a small prize of about 4000 euros. Her video, first uploaded on Twitter and gradually surfaced on rest of social media, garnered a massive crowd. California Reporter Says She Tried to Contact Dead Man for Comment and the Internet Hopes She Is Joking!

Spain’s Christmas litter known as El Gordo, “The Fat One,” is an annual tradition where families and groups of friends band together to pool money and buy tickets. According to media reports, the lottery does not award as large individual prizes, but its total amount is given to ticket buyers, and that makes it the wealthiest in the world. Pig Follows Journalist Live Reporting on Floods in Greece And Bites Him.

Escudero is a reporter in national broadcaster RTVE. In the now-viral video, Escudero can be heard screaming into the cameras, saying, “I’m not coming to work tomorrow!” as her name was announced in a Spanish lottery. But she was left red-faced, the moment Escudero realised that she was awarded only 5,000 euros out the lottery’s total prize pot of 2.24 billion euros that it had doled out this year.

She later took to Twitter, saying she regretted her actions which gave the impression that Escudero was quitting her job. Escudero said she had been going through a “difficult” time for “personal reasons.” According to reports, the largest sum awarded to an individual this year in the lottery was worth a 4-million-euro, a total top prize shared between 10 ticket holders.

(The above story first appeared on LatestLY on Dec 26, 2019 03:59 PM IST. For more news and updates on politics, world, sports, entertainment and lifestyle, log on to our website latestly.com).