Spooky Snaps! Girl's Birthday Photoshoot Based on Horror Film 'The Grudge' Will Surely Give You Nightmares (Check Creepy Viral Pics) 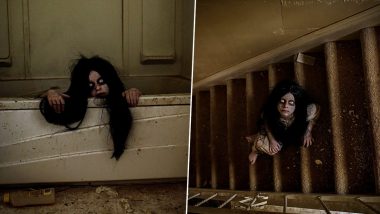 Have you seen the supernatural horror film The Grudge? If you are all for horror flicks and love watching through such things then you shouldn't miss the photoshoot by a little girl on her birthday. The seven-year-old decided to have a birthday photoshoot based on the theme of The Grudge and the result is not disappointing, as she looks like a perfect ghost straight out of the horror movie. Spooky pictures of the little one have impressed the netizens at the ideation while freaked out others. The pictures are scary, we agree. 'Bee'zarre! Woman's Maternity Shoot With 10,000 Bees on Her Belly is Creating Buzz Online, But Know The Story Behind This Unique Idea (Check Viral Pics).

Facebook page Trickey Photography posted these scary looking pictures with an explanatory caption. It said, "Check out my daughters 7th Birthday Photos we did!" and mentions that last year the little one chose Pennywise. Looks like the girl is very much into horror cosplays and characters. Posing as the possessed ghost from the film, the pictures look like exact scenes from the horror film itself and they are bound to creep you out. And her posing skills have impressed the viewers.

Be it indoor or outdoor shots, the entire setup is so convincing of being a true horror set. The little one gets into the character a little too well! Many have appreciated the idea while others were relatively scared by these pictures. One of them commented, "These are the best birthday photos ever seen!" While others appreciated how sportingly the little one has posed in these pictures. Someone suggested she should be a part of such movies because she is so good at it! Well, she really is. This concept reminds us of a similar shoot that was done during Halloween 2019 by a mom last year. She used her children as zombies but netizens were not too impressed back then. Her creepy experiment had backfired.

(The above story first appeared on LatestLY on Sep 26, 2020 07:14 PM IST. For more news and updates on politics, world, sports, entertainment and lifestyle, log on to our website latestly.com).