'Bee'zarre! Woman's Maternity Shoot With 10,000 Bees on Her Belly is Creating Buzz Online, But Know The Story Behind This Unique Idea (Check Viral Pics) 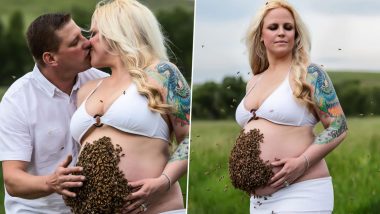 Photoshoots have become an emerging trend, be it of any kind, pre-wedding, wedding, maternity or a newborn. And in an effort to be unique, some people go really to the next levels, even it may be bizarre. A picture of a woman's maternity shoot is creating a buzz (oops) because she used more than 10,000 bees in her photos. Yes, 'bee'zarre! And as unique it may be, people on social media are not impressed, calling it rather disturbing idea. However, the woman in question is a professional beekeeper and she has a story to tell. Pre-Wedding Photoshoot Shows a Suicide Scene Between To-Be Husband and Wife, Angry Netizens Slam The Idea for Mocking Such a Serious Issue.

Bethany Karulak-Baker posted the pictures of her maternity shoot online. The pictures show a swarm of bees on her baby bump as she casually stands ina garden. In another, she's seen kissing her husband, with the bees still on her belly. The caption mentions that these are nearly 10,000 bees! We do not even want to imagine the stings! The pictures were shared on Twitter by another user and netizens could not understand why would someone do it to themselves. Now, Baker has taken to her own Facebook account to narrate her side and explain why she did what she did. Wedding Photoshoot Fail! Californian Couple Swept Off Rocks Into Sea After Huge Wave Crashes Them While Posing For Pics, Rescued by Lifeguards (Watch Scary Video).

Here Are The Maternity Pics:

Check how these pictures were received on Twitter when someone posted their screenshot.

Allergic is the Keyword!

An allergic beekeeper. I’ve officially seen it all.

Is the queen tethered to your belly inside of a cage or are you normal?

The reactions are similar but why would the woman do it? What's her story? She changed her profile picture to one of the pictures from the shoot and explained the difficulties she went through. She explained that she is a professional beekeeper. She had to undergo a miscarriage and the trauma it got her into. She suffered from depression post that surgery and when she got pregnant again, she was in constant worry, due to the pandemic situation. She mentioned that it is not just a photo with bees on her belly but a sign of her strength. She writes, "I have emerged from these events like a butterfly from a cocoon; strong, beautiful, and ready to take on the world. So, you see, this isn’t just a photo of a woman with honeybees on her belly. This photo represents much, much more. My only hope is that one day my children will look at this photo and see the warrior inside of me." The picture does have an important message but it is difficult to come through. So people aren't really convinced with it.

(The above story first appeared on LatestLY on Jul 04, 2020 09:12 PM IST. For more news and updates on politics, world, sports, entertainment and lifestyle, log on to our website latestly.com).