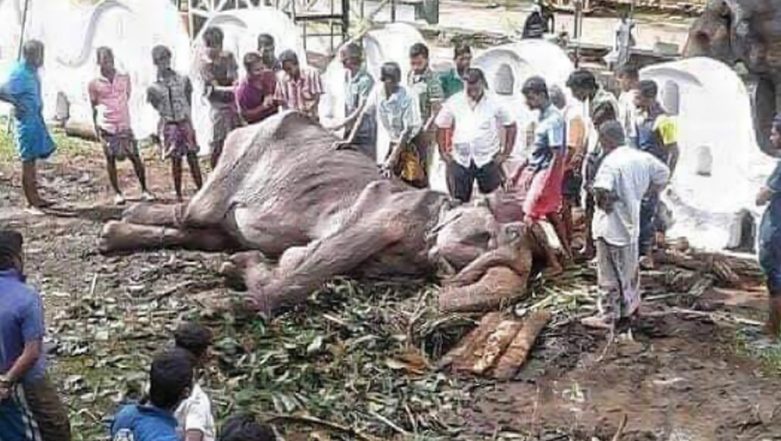 A picture of an elephant, tired and collapsed, identified as 70-year-old named Tikiiri is breaking the hearts of the social media users. The image emerged online after a local activist from Sri Lanka reported about the elephant’s health condition after being forced to march for tourists at a Buddhist Festival. The recent picture of Tikiiri is raising concerns among netizens over animal abuse. It turns out that Tikiiri was one among 60 elephants that marched through the streets for the Sri Lankan annual Buddhist festival, Esala Perahera. Elephant Celebrates Five Years of Freedom From Captivity With a Customised Cake!

The Kandy Esala Perahera, also known as The Festival of the Tooth is a popular celebration in the country which is held in July and August every year. The festivity includes elephants adorned with lavish garments. The elephant's emaciated frame hidden behind the costume came to light when Lek Chailert, founder of the Save Elephant Foundation in northern Thailand, shared photos of her.

Metro reports that there is a growing movement in Sri Lanka striving to stop the elephants being used in the festival. As the pictures of Tikiiri went viral, a temple spokesperson claimed that the elephant’s owner had “specifically requested” her participation in the festival. There is a traditional belief that such religious offerings can cure weak animals. “Taking into account the great service performed by Tikiri to the Esala procession, the request was accepted in terms that she is proved to be fit to take the streets after a thorough examination. Given that Tikiri was proved to be fit, she was allowed to take part in a few processions,” they said in the same report.

But the above picture shared by the same Facebook page contradicts the temple’s claim that she is fit. It was further reported that the elephants were being beaten with sticks by the mahouts. Although the elephants try to avoid the whipping, the chains around their legs prevent them from escaping.