Sushma Swaraj, Priyanka Chopra, Suhana Khan Trolled Online: Why Are We So Scared of Women Making Choices And Having An Opinion?

Recently, Sushma Swaraj, Swara Bhaskar, Priyanka Chopra and Suahan Khan were trolled online for various reasons. This isn't new, famous women have always been a favourite target of trolls and it says a lot about how the society at large is scared of them. 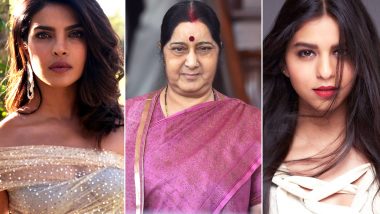 A Twitter user on Wednesday appreciated Sushma Swaraj for her good work and motivated her to stay calm despite all the criticism she receives on social media. Replying to him, she quoted the Bhagwad Gita and also said that she is a devotee of Lord Krishna and, therefore, remains calm and unaffected by negativity. Another Twitter user was, however, quick to troll her accusing her of becoming arrogant and easily agitated. But she maintained her cool and replied saying that devotion to Krishna can only happen when a person is calm and that he was the one actually getting angry in this situation, not her.

Not long ago, Sushma Swaraj was also trolled online for helping an inter-fath couple get their passport made.

Priyanka Chopra is the latest fodder for trolls online for reportedly dating singer Nick Jonas. Priyanka and Nick have an age gap of 10 years, and since the woman being older to the man goes against the society's ‘ideal norms’, the duo has been trolled left, right and centre.

In another example, actress Zaira Wasim, on recently speaking up about her battle with depression, was also made a subject of trolls.

Superstar Shah Rukh Khan’s daughter Suhana Khan, who is just a teenager, was made fun of for posing in a bikini and sharing the picture online. Suhana has also been trolled previously for her pictures.

Congress spokesperson Priyanka Chaturvedi, who is known to always speak her mind, was threatened her daughter's rape on Twitter in July this year.

Do you notice the similarity? These are all women from different age groups, from different fields, who have been trolled just because they chose to make a choice, or have an opinion. They all assume some kind of power, they are liberated, living a life on their terms. And the common reason why they are trolled is that they speak their minds or live their way. Their freedom of expression doesn't go down well with the society that is deeply rooted in patriarchy, resulting in them getting trolled.

These episodes lead us to some relevant questions we must address. First of all, we need to question our conscience as to why we assume it to be a right to make personal attacks on celebrity women. A woman who is famous, her life is there in the public domain. A general sense of jealousy and hatefulness stems from the society's misogyny towards successful women. For instance, Priyanka Chopra has achieved greater success than a lot of male Bollywood stars and Sushma Swaraj is one of the most powerful women in the country.

Secondly, only because the lives of these celebrities are in the public domain, specially through social media, they have become easy targets. People's hatefulness has got a way to be channelised in the face of online trolling.

And lastly, why do we have such double-standards? If men date or marry younger women, we hardly take notice or react. For instance, people are drooling over the 'cuteness' of rumoured couple Ranbir Kapoor and Alia Bhatt while Ranbir, is 10 years older to her, much like Priyanka is to Nick.  The reality is it is Ranbir and Alia's choice as much as it is Nick and Priyanka's choice. Similarly, we are extremely sentimental and protective about the Prime Minister's designation and role, but okay being disrespectful to Swaraj who also holds one of the highest government ranks in the country.

While we are talking about feminism, women rights and empowerment, we continue to pick on women over petty issues. Refusing to accept and respect the choices of these women, we mindlessly take to online trolling.

In conclusion here's a question for you to think over - Why are we so scared of free women?

(The above story first appeared on LatestLY on Jul 11, 2018 05:20 PM IST. For more news and updates on politics, world, sports, entertainment and lifestyle, log on to our website latestly.com).