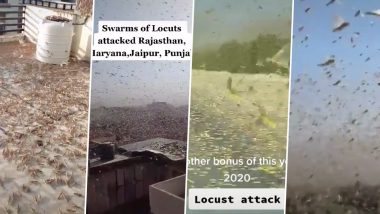 As if coronavirus pandemic wasn't enough, we have havoc flying in the sky in the form of locusts, commonly known as Tiddi Dal or Tidde. You may have read about locust attacks or as it is called in Hindi Tiddi Dal ka hamla, but terrifying videos of locust attack will show you how intense the situation is. Video sharing platform, TikTok is filled with clips of locust attacks that look straight from scenes of horror movies. Also, known as desert locusts, these little insects come in swarms of millions and have the ability to finish vegetation of an area overnight. According to the Food And Agriculture Organisation (FAO) a one square kilometre swarm, containing about 40 million locusts, can eat as much food as 35,000 people in

Scary videos from Rajasthan, Madhya Pradesh, Punjab, Haryana showing swarms of these locusts are going viral on TikTok and some of them even show people catching hold of some of the locusts. The swarms of locust can make visibility zero and gives an impression of what doomsday may look like. Recently these locusts entered Maharashtra and while the farmers are struggling to battle the costs, more pictures and videos surfaced claiming that locusts have entered Mumbai! They were later refuted as rumours and the videos that were being claimed to be of locust attacks from Juhu, Vikroli and Colaba were untrue.

The Locusts that have come to India are of a voracious grasshopper species, Schistocerca gregaria, that are a short-horned grasshopper. These Locusts can dramatically transform, they can change colour, and also grow larger. These swarms can travel great distances (up to 150 km daily). Watch some of TikTok videos of Locust attacks going viral:

This One Has The Funeral Dance Song in the Background

You Can Only See Locusts

Video Said To Be From Barmer, India

Straight Out of A Horror Movie

Some People Are Even Making Videos Holding Locusts

♬ Can We Kiss Forever? - Kina

Look At This One

It is being said that the Cyclonic storms that hit Oman and Yemen back in 2018 is the reason behind the current locust outbreak. Desert locusts bred in temporary lakes due to these storms in the Arabian peninsula and were only spotted after they first turned towards east Africa in 2019. Kenya reported its worst locust outbreak in 70 years, while Ethiopia and Somalia haven’t seen one this bad in close to three decades.

(The above story first appeared on LatestLY on May 29, 2020 05:02 PM IST. For more news and updates on politics, world, sports, entertainment and lifestyle, log on to our website latestly.com).