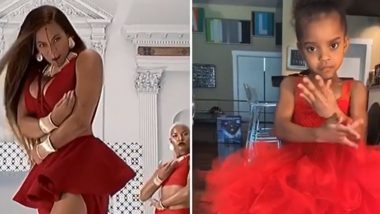 Beyoncé Knowles-Carter’s highly anticipated Black Is King, is out and it has undoubtedly taken the Beehives by storm. The world is talking about the new visual album celebrating Black culture through artistry, creative direction and fierce looks, but it has motivated a lot more to a six-year-old girl, Grey Skyline Evans. The little girl is getting a lot of love on Instagram for her performance of a bit of choreography in a video from Beyoncé’s recently-released. The outstanding video shows Skye performing the dance to “My Power,” and boy, is she talented. Dressed in a ravishing red ensemble, the six-year-old took the social media on fire, giving netizens a taste of her talent by hitting the dance moves.

Grey is already a social media sensation for her impeccable dance moves. The six-year-old has more than 541K followers on her Instagram account, Grey’s World. Her social media account shows her interest in an assortment of dance and hip-hop videos, as well as toy promotions. The viral video shows the little girl, channeling her inner-Beyoncé, oh so perfectly! With that strong expression and perfect dance moves, no wonder that her video has sent the internet on fire. Grey’s social media account has also posted another side-by-side video that will give viewers a clear idea on her dance moves, so apt to the original choreographed song. Is Beyoncé an Italian Woman Named Ann Marie Lastrassi Practicing Witchcraft? Fact Check Behind US Congressman KW Miller's Fake Claims.

“Grey is inspired by Beyoncé because she is the best. Grey loves her songs and her dance moves. She loves trying to emulate the moves that Beyoncé does, and she prides herself in being able to try and keep up with her,” Grey’s mother, Ylleya Evans was quoted saying in Good Morning America.

Isn’t she great? Her fierce expression, and perfect dance moves show how she is inspired by Queen B, like many other followers. There have been no reports if Beyoncé had seen the viral video or not, but once she does, the singer will too be impressed with the little one’s classic dance moves and confidence.

(The above story first appeared on LatestLY on Aug 05, 2020 04:44 PM IST. For more news and updates on politics, world, sports, entertainment and lifestyle, log on to our website latestly.com).