‘Toxic’ Is Oxford Dictionary’s Word of 2018: Know the 8 Words Shortlisted for the Word of Year 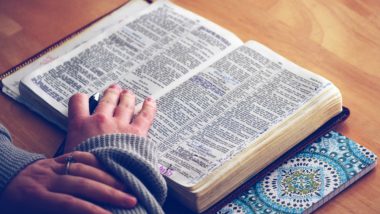 Dictionaries have been choosing annual words every year by keeping in mind the occurrence around the globe. For 2018, the news and media coverage had mostly been negative. So, to sum up, this year’s human experience, Oxford decided to go with the word, ‘toxic’ finding their way into the modern lexicon. Twitter was quick to point out the word’s popular use concerning the #MeToo movement. Apart from all the other words that were shortlisted, Oxford Dictionaries crowned Toxic because word best captures “the ethos, mood and preoccupations” of 2018. As Oxford editor Katherine Martin told various media outlets, the word touches on almost all the preoccupations we could think of that have characterised this year, ‘literally and metaphorically.’ Merriam-Webster Adds 840 New Words to the Dictionary! ‘Adorbs’, ‘Fav’, ‘Instagramming’ Are Now Certified Words.

Toxic has been used as a synonym for poisonous for hundreds of years, but now it is no longer limited to any chemicals in a lab. The word is stretched far beyond the literal, and we have toxicity as a metaphor. According to the Oxford Dictionaries, the reason behind choosing ‘Toxic’ after ‘youthcake’ in 2017, is the sheer scope of its application that made the word the stand-out choice for the Word of the Year title. “Our data shows that, along with a 45% rise in the number of times it has been looked up on oxforddictionaries.com, over the last year the word toxic has been used in an array of contexts, both in its literal and more metaphorical senses,” stated the dictionaries in its release. The words that are used habitually alongside toxic are—Chemical, Masculinity, Substance, Gas, Environment, Relationship, Culture, Waste, Algae and Air. India's First Sign Language Dictionary Launched for Hearing and Speech Impaired People.

1. Gaslighting: Manipulate (someone) by psychological means into doubting their own sanity. The manipulation referred to the situation where victims are often misunderstood, questioning how they remember events, dismissing their valid worried as ‘crazy’ or ‘sensitive’.

2. Incel: An incel is a member of an online community of young men who consider themselves unable to attract women sexually. Typically, they hold views that are hostile towards men and women who are sexually active. This term is born out of an online subculture in which forum members put their celibacy down to women ‘withholding sex’. They are consistent advocates for rape, glorifying and inciting violent misogyny.

3. Techlash: A strong and widespread negative reaction to the growing power and influence of large technology companies, particularly those based in Silicon Valley. It came after merging ‘technology’ with ‘backlash’. Hence, we get Techlash. In 2018, the public voiced concerns over top industries including questionable data privacy, disinformation, anti-competitive practices and tech’s impact on mental health.

4. Gammon: Typically used in the United Kingdom as a derogatory term for an older middle-class white man whose face becomes flushed due to anger when expressing political (typically right-wing) opinions.

5. Big Dick Energy (BDE): An attitude of understated and casual confidence. In a now-deleted tweet, pop icon Ariana Grande commented on the physical endowment of her then ‘fiancé’ comedian Pete Davidson. Along with the flurry of responses, a Twitter user included the phrase ‘excludes big dick energy’ in a joking character analysis of Davidson and the tweet soon went viral.

6. Cakeism: Primarily a word used in the UK, cakeism is the belief that it is possible to enjoy or take advantage of both of two desirables but mutually exclusive alternatives at once.

7. Overtourism: An excessive number of tourist visits to a popular destination or attraction, resulting in damage to the local environment and historical sites and poorer quality of life for residents. Overtourism has become a heavy burden for numerous ‘must-see’ locations in recent years. It turns that the crowd has increased so much that it caused environmental, infrastructural and cultural damage to a number of destinations.

8. Orbiting: The action of abruptly withdrawing from direct communication with someone while still monitoring, and sometimes responding to, their activity on social media. Forget ghosting, ‘orbiting’ is the new dating buzzword for 2018. Orbiters ‘like’ and comment on posts, watch ‘stories’ on Instagram and Snapchat or generally maintains an online presence in your life without any promise of meaningful interaction.

So, now you know the word of 2018 and also the shortlisted words that you can use in your everyday life. All the above words reflect, almost all the situations that have hit the headlines.

(The above story first appeared on LatestLY on Nov 20, 2018 10:38 AM IST. For more news and updates on politics, world, sports, entertainment and lifestyle, log on to our website latestly.com).