Instagram reels have become very popular and the songs that we hear on reels are sometimes original versions and sometimes covers or remixes. Here is a list of songs that are trending on Instagram. 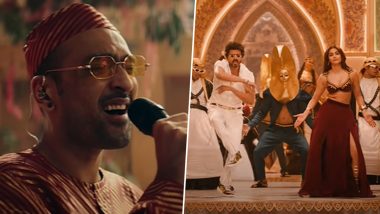 New Delhi, April 18 (IANSlife): Making reel videos on Instagram is, without a doubt, the hottest trend on the internet right now. Of course, reels are incomplete without the appropriate music, as it aids in engaging the appropriate audiences. No matter how hard you work, your videos will only reach the greatest number of people if they are accompanied by trending songs or viral trends. Here is a list of songs that are trending right now on Instagram. Instagram Now Allows Users To Add Product Tags in Feed Posts in the US.

2. Can We Skip To The Good Part

The trend, which began on TikTok, is all about showing us your past struggles and then emphasising the good. This song was released in June of 2017 by the American Indie pop trio band AJR and has since been used in a variety of videos.

This popular audio is taken from a Yung Lean song called "Gingseng Strip 2002," which was released in 2013. The song has been resurfaced on Instagram 9 years later.

The song 'Arabic Kuthu' from Thalapathy Vijay and Pooja Hegde's upcoming Tamil-language film 'Beast,' has gone viral on social media. The popularity of the Arabic Kuthu lyrical video song 'Halamithi Habibo' has skyrocketed, with celebrities from all walks of life grooving to its upbeat beats. The hashtag #ArabicKuthuChallenge has been trending on social media.

The Coke Studio track - Pasoori, sung by Ali Sethi, is everyone's current obsession. Because of its visual appeal, melodious music, and soulful lyrics, the song has been on everyone's lips. It's no surprise that reel makers are also smitten with the song.

Arijit Singh sings the catchy Atak Gaya song from the film Badhaai Do, and Amit Trivedi composed the music. The song is getting a lot of attention, with many couples participating in the Badhaai Do Challenge and sharing their love story.

The Gangubai Kathiawadi wave has swept social media, and its songs have spawned numerous viral dance trends on Instagram. Not only Dholida, but Meri Jaan, a romantic song starring Alia and Shantanu Maheshwari, has inspired several dance videos.

Anjan Ki Siti, sung by Rehana Mirza, is a Rajasthani folk song that appears in many travel reels.

These songs have viral and have amassed millions of views and have also made a place in many playlists.

(The above story first appeared on LatestLY on Apr 19, 2022 03:37 PM IST. For more news and updates on politics, world, sports, entertainment and lifestyle, log on to our website latestly.com).