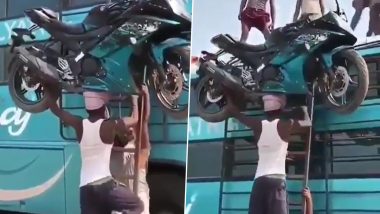 A video of an Indian man carrying a whole motorcycle on his forehead to take it on top of a bus is going viral. But while it was shared with a very positive message that seems to be "glorifying" the man for how "incredibly" he is being able to carry such a heavy load on up a bus, some call it "poverty porn". Yes, some people are of the opinion that this glorification of poverty is absolutely disgusting and must be stopped. However, the video is not new, it has been shared online many times in the past, BUT most of the reshares contains some sort of compliment for the man being able to perform the dangerous task. TikTok Video of Girl Getting an Abortion Is Going Viral, Netizens Are Divided!

This time a doctor of Ayurveda who goes by the handle name @DoctorAjayita shared the video with a caption "India is absolutely incredible...so much strength in such a small frame!" In no time the video went viral with people pouring in all kinds of opinions. While some say it is a tricky yet dangerous physics funda that he is able to balance out the weight of the bike on his head, some are outright disgusted by the glorification of the labour the man is "forced" to do for presumably nothing more than peanuts!

'Incredible Strength of India'- Watch Video of Man Carrying Bike on His Head:

India is absolutely incredible...so much strength in such a small frame! pic.twitter.com/zm4R5cjT4w

Here are the Reactions:

And most of them die while fighting poverty and talent sleeps with them in grave. What a pornographic glorification of poverty by our modern day intellectual 👏

This is what exploitation poverty and desperation looks like

"We need to be ashamed-not proud .Bec labor is cheap ,he needs that one meal a day for himself and family n a bottle end of day he is doing it. its not show of strength but of org using humans n making huge profits .Cant we have a mechanised system? R we so backward?", wrote one Twitter user. Another Twitter user wrote: "Physics. He is balancing the bike in a way, least weight is actually on his head. Just like a horse driving a cart. Now the question is, if the bike falls of or if he looses the balance. In that case he will get whiplash injury of neck which can kill him on spot", the video is filled with comments of all kind.

(The above story first appeared on LatestLY on Jan 24, 2021 05:32 PM IST. For more news and updates on politics, world, sports, entertainment and lifestyle, log on to our website latestly.com).