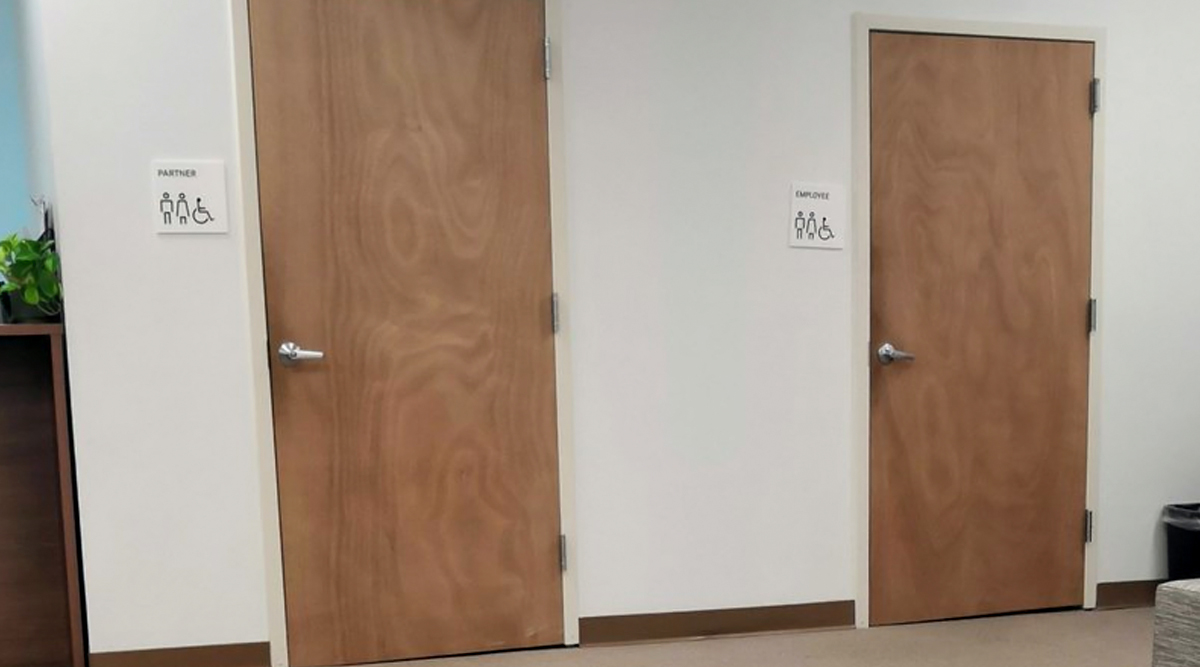 Uber lands itself in controversy, once again! It seems that the company either have lesser knowledge or no knowledge at all about how its centres are treating their employees. As a part of its commitment to misclassifying drivers, Uber has at least one office that created two separate bathrooms for drivers and “employees.” Yes, as disgusting as it sounds, the two separate bathrooms existed at a Greenlight Hub office in Providence, Rhode Island, United States. It was an Uber driver who witnessed the corporate division! The driver quickly took a photo and posted on Twitter. Considering Uber’s recent ‘reputation,’ the tweet was meant to go viral. People on the internet backlashed the ridesharing company. Uber Reveals Nearly 6,000 Sexual Assault Cases Reported in US.

So when Erika Betts visited a Greenlight Hub office, he was appalled to see two separate bathrooms for Uber’s “partners” aka drivers and employees. Greenlight hubs are offices that Uber uses to sign up new drivers and for in-person driver support. He tweeted, “The @Uber hub in my market has designated bathrooms. Not for male/female, but for partner & employee. Anyone else think it's strange that Uber views partners & employees as two separate classes of people?”

The @Uber hub in my market has designated bathrooms. Not for male/female, but for partner & employee.

Anyone else think it's strange that Uber views partners & employees as two separate classes of people? pic.twitter.com/3SGeKSae3g

Betts’ tweet caught the attention of hundreds of users—including the drivers who shared their outrage over the corporate division. They trolled the company for upholding classism. Not just commoners, the toilet segregation even angered public figures. New York Democratic Representative, Alexandria Ocasio-Cortez tweeted a link to the story of these separate bathrooms.

somehow I can see Uber making the argument in court: "they're not employees!! we don't even let them use the same bathrooms as us"

This is such an important piece of information to share. Thank you for tweeting ❤️✊🏼 Drivers are definitely employees and @uber is intentionally misclassifying y’all to evade labor law.

Hi Erika - I looked into this. This is not our policy and it's absolutely unacceptable. The signs are coming down today.

That bathroom was also being used for employee storage, but that's not an excuse. I don't believe this is the case anywhere else (and it's certainly not our design policy) but we're doing a full review now

As the tweet surfaced, Uber apologised. The company has argued that drivers should not be classified as employees but independent contractors. The rule denies drivers the right to receive minimum wage or apply for benefits like health care and workers’ compensation. This has long been a point of controversy for Uber. Amid the recent controversy, the company publically expressed its regret for the restrooms with a spokesperson confirming to Vice that the signs were being removed.