Michelle Obama's reaction to Harris’ swearing-in and the duo sharing a fist bump is going viral on the internet, sparking social celebration of black women. Netizens sure feel the power and pride. 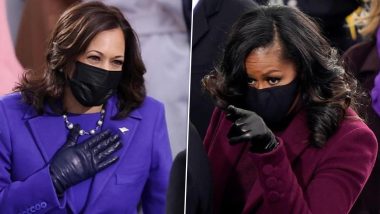 Moments from the US Presidential Inauguration 2021 continue to entertain the social media users. The world watched the ceremony online, as Joe Biden sworn-in as USA’s 46th President. Kamala Harris also took oath as the new Vice President, becoming the first woman, Black person and first Asian-American to serve in the position. It is a historic moment for the country, and certainly many photos and videos from the Inauguration ceremony surfaced online. But the moment of the day’s ceremony has to be the interaction between VP Kamala Harris and former first lady, Michelle Obama. Her reaction to Harris’ swearing-in and the duo sharing a fist bump is going viral on the internet, sparking social celebration of black women. Netizens sure rejoice the power and pride.

There has been several pictures and videos from the Presidential Inauguration that has gone viral on the internet. Be it Kamala Harris’ niece, Meena Harris’ husband, Nikolas Ajagu’s pair of Dior Air Jordan 1s or the VP’s purple coat, social media at the moment is filled with photos and clips from the event. As President Joe Biden and Vice President Kamala Harris walked out of the Capitol building, many among the crowd came forward to congratulate them. Among them, was, of course, former President Barack Obama and former first lady, Michelle Obama. But it was the moment shared between Michelle and Harris that is winning the internet.

The VP’s reaction to the former first lady’s 'You Go Girl!' expression is a moment. The duo went on sharing a fist bump and hugging each other at the event. The moment, seemed to speak to the history both women had made in their different-yet-kindred roles in American politics.

JOSEPH RAYSHAWN BIDEN, YOU BETTER DO WHAT YOU SAID YOU WAS GON DO! pic.twitter.com/euEh3wRkPZ

Replaying this fist bump between #MichelleObama and #KamalaHarris on a loop 😭❤️ pic.twitter.com/XkwyQOj3jF

The Power of Women!

The viral moment shared between the two embodied the force that is Black women. US Presidential Inauguration continues to trend, as people celebrate the historic swearing-in ceremony.

(The above story first appeared on LatestLY on Jan 21, 2021 04:36 PM IST. For more news and updates on politics, world, sports, entertainment and lifestyle, log on to our website latestly.com).