Dr Agarwal said very often tattoo artists use the same needles to save money as the tattoo needles are expensive. 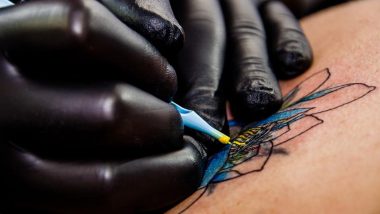 Varanasi, August 7: In a shocking incident, multiple cases of people contracting HIV after getting inked have emerged in Uttar Pradesh's Varanasi. According to reports, around 14 people have fallen sick after getting cheap tattoos. This has led to authorities issuing warnings to people about cheap tattoo parlours.

Speaking to NDTV, Dr. Preeti Agarwal of Pandit Deendayal Upadhyay Hospital said that after careful examination and counselling they found that many HIV patients had got tattoos from local parlours following which their health started deteriorating. She said that further investigation into the case is underway. West Bengal Shocker: 26-Year-Old Newly-Wed Found Dead in Kolkata; Husband Held.

The alleged incident of people contracting HIV after getting tattoos came to light when a 20-year-old man from Baragaon and a 25-year-old woman from Nagma fell sick. Sources said that several tests were conducted including that of viral typhoid malaria but to no avail. When the patient's fever did not come down, HIV tests were conducted in which all those who were sick tested positive for the disease.

After the patients were examined thoroughly, authorities learned that none of the HIV-positive patients had contracted the disease sexually or through infected blood. Interestingly, the only common thing among all the patients was the fact all of them had got inked recently. Maharashtra Shocker: Woman Doctor Goes for Morning Walk While Patient Bleeds to Death After Delivery at Hospital in Jalna; Booked for Negligence.

A further probe into the matter revealed that all the HIV-positive patients had got tattoos from the same person. Shockingly, the tattoo artist had used the same needle on all of them. Dr Agarwal said very often tattoo artists use the same needles to save money as the tattoo needles are expensive. She cautioned people and asked them to check if the needle is brand new before getting inked.

(The above story first appeared on LatestLY on Aug 07, 2022 09:24 PM IST. For more news and updates on politics, world, sports, entertainment and lifestyle, log on to our website latestly.com).