Video of Kanye West Apparently Eating His Earwax is Going Viral, Twitterati is Grossed Out Deciding What He's Upto 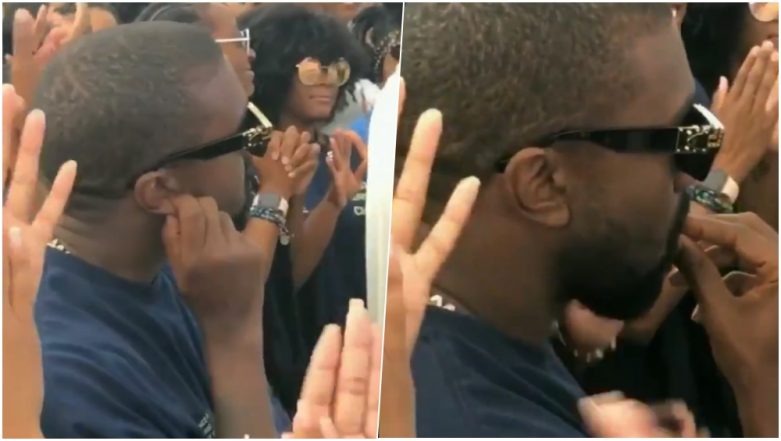 Kanye West doesn't really need any tactics to get a mass of viewers on his activities. The American rapper has been in the news after wife Kim Kardashian teased of his new album Jesus Is King, releasing next month. But more than that, a video taken from Sunday service over the weekend has confused the netizens. The caption states that West was chewing on his own earwax. Although in the video he does seem to be eating something after rubbing his earlobe, netizens cannot decide upon his actions. The video is going viral with over a million views, but what is Kanye West doing, the question still remains. Kanye West's Slippers at 2 Chainz Wedding Became Talk of Twitter, Check Funny Pictures and Tweets.

The video shows Kanye surrounded by people who are clapping and cheering. Suddenly it zooms into his head and Kanye is seen digging something off the lower part of his right earlobe. He then puts the same finger in his mouth! Twitter user @j0rgecastr0 captioned the footage, "So I didn’t even notice but I got a video of @kanyewest eating his earwax." The video went viral over the weekend, which each one trying to interpret what is Kanye really doing? Some pointed out he could be eating chewing gum. Kanye West Accidentally Reveals His iPhone Passcode & Twitterati Can’t Help but Create Funny Memes.

So I didn’t even notice but I got a video of @kanyewest eating his earwax 😂 pic.twitter.com/LZyungkpDJ

The video has crossed more than 3 million views and close to 26,000 retweets. Everyone is trying to understand what is Kanye doing. Check some of the interpretations by the Twitterati.

He clearly took something out of his mouth probably his gum.

Not a gold digger

I ain’t sayin’ he a gold digger

Meanwhile, the question still remains about what exactly was Kanye chewing on. Also, it is quite common for some people to hide their gum behind the ear, like a safe spot! As some people also commented that it is chewing gum which he probably hid behind. Gum or not, or definitely not earwax, Twitterati is grossed out by the footage.