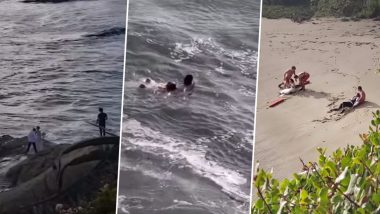 Every couple wants some exotic wedding photos to show off their big step in life. But clicking such pictures can sometimes come at great risk. A Californian couple learnt it the wrong way when their shoot by the sea risked their lives. A couple was having their wedding photoshoot on an oceanside rock on a Southern California beach. A big wave crashed them as they posed and the two swept off into the sea waters. Thankfully, lifeguards came in quick for their rescue. A video of their photoshoot ending in water was captured by an eyewitness and has been shared on Facebook. The clip is going viral. Pre-Wedding Photoshoot Shows a Suicide Scene Between To-Be Husband and Wife, Angry Netizens Slam The Idea for Mocking Such a Serious Issue.

The incident took place near the Montage Hotel on Laguna Beach's Treasure Island Beach recently. The bride is seen wearing her white gown and posing with her husband. The two are near to the ocean waters while the photographer is a little away from them. Just then a huge wave is seen crashing the rock on which the couple is standing and they were dragged in the water by the force. The Laguna Beach Fire Department arrived and other lifeguards came in for the rescue. As per reports, both of them are fine and have luckily not got any injuries. Getting Married Soon? 7 Unique Pre-Wedding Shoot Themes You Could Try With Your Partner.

As you can see the bride in her gown was carried out with the help of two lifeguards while the husband is also seen lying on the beach. This reminds us of another couple from Kerala who was shooting in a canoe and fell in the water as they were about to kiss for a pose. It was a pre-wedding shoot being done but unlike an accident, it was a pre-planned thing by the team for getting some fun shots. While that was a safer practice, the one above was quite risky and thankfully, the help was quick and there were no injuries despite the rocky beach.

(The above story first appeared on LatestLY on Jul 03, 2020 02:20 PM IST. For more news and updates on politics, world, sports, entertainment and lifestyle, log on to our website latestly.com).