What Was Your Harshest Rejection? Twitterati Narrate Their Terrible Breakup Stories and Some Will Move You to Tears

Breakups are difficult are there is no defending the fact. After TV writer Eden Dranger tweeted narrating her harshest rejection, more people took to the platform explaining how they were dumped or not accepted by their crushes or lovers. 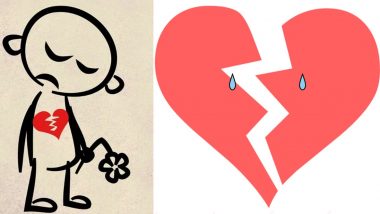 Breakups are difficult are there is no defending the fact. Leaving a person who has loved deeply is quite an emotionally draining task and may also bring your morale down. After TV writer and performer Eden Dranger tweeted narrating her harshest rejection, more people took to the platform explaining how they were dumped or not accepted by their crushes or lovers. Eden tweeted saying, "What was your harshest rejection? I'll go first. One time, a super charming guy I had a crush on took me out to dinner a few times, invited me to a swanky gala, had me over for Thanksgiving, and then introduced me to his buddy as a girl I wish was my sister'." That would have hurt really bad! Worst Date Ever? Woman Dumped for Being Fat After Travelling 3 Hours to Meet Tinder Date, Recovers Half the Money Via GoFundMe Page.

Eden's tweet attracted a lot of social media users who defined how terribly they were left by people they loved. While some were first-time dates, others were by ditched by their partners. And reading the tweets it seems that people have been through really terrible times. Some also tweeted how they were outcasted from their friends' circle in the most embarrassing way. Meanwhile, some wrote about job rejection letters and other similar events in their lives. Tinder Date Gone Wrong! Man Meets GF's Parents Only to Find Out That He Has Had One Night Stand With Her Mother.

What was your harshest rejection?

I’ll go first. One time, a super charming guy I had a crush on took me out to dinner a few times, invited me to a swanky gala, had me over for Thanksgiving, and then introduced me to his buddy as “a girl I wish was my sister”.

That's A Lot of Rejection For a Day

I once went speed dating and I was the only guy who showed up, there were 14 women.

All 14 chose to stay single than go out on a date with me.

Dinner date w guy I met online. We'd been talking for a month & seemed to hit it off. He checked his cell a few times before dessert came, & announced he had the opportunity to meet a girl he'd been talking to & didn't want to miss the chance. He put 50% $ on the table and left.

In 6th grade the girls I normally ate lunch with cornered me one morning and presented me with a petition they’d all signed, demanding that I no longer sit with them.

In front of everyone.

Johns Hopkins sent me a rejection letter that read: “We read many talented writers this application cycle. Unfortunately, you were not one of them. We hope you made other plans.”

Such a Horrible Situation!

A guy I was seriously dating called me on my 30th Birthday, while I was at the office working, broke up with me, 20 minutes before I walked into a surprise party, that he knew I was walking into 😐 #HappyFrigginBrthdaytome

Being dumped because I'm "wifey material" 😒🤨

Waste of Time, Energy and Money

Talked on the phone/text everyday for 3 weeks. Went out on a date after he swore he couldn’t stop thinking about me. Planned a second date. Just to ghost me for 3days,texts me that he’s “too busy” and couldn’t be in a relationship. 2weeks later he’s posting some girl on snap pic.twitter.com/j2HESUcGGi

Saw a girl at a bar. We made eye contact. I walked over to talk and she pointed like Babe Ruth calling a home run shot and said "Go Away". To this day she's the only woman who hasn't wasted a minute of my time.

If 'Harshness' Had to be Defined:

I went on a date with a guy the day before my birthday. He was sweet, we had a good time, everything was nice and he walked me back to my car and hugged me goodbye. 30 minutes later he texted me that he wasn’t attracted to me and that I “looked like his brother with long hair” 😐

Probably finding out my wife was screwing her daughter's boyfriend... the daughter I'd adopted.... the boyfriend being the father of my wife's grandchild.

They're married now and the daughter is in prison....

I made bad decisions.

Putting yourself together after a breakup could be really difficult. No matter what kind of rejection or breakup, the situation makes people depressed, lonely and sad. While the end of a romantic relationship often hurts badly, not being able to be with a person you are used to, is also difficult.

(The above story first appeared on LatestLY on Nov 11, 2019 05:19 PM IST. For more news and updates on politics, world, sports, entertainment and lifestyle, log on to our website latestly.com).