Your WhatsApp account won’t be deleted for at least three months. The latest update has once again sparked, meme-fest on Twitter. WhatsApp funny memes, and hilarious reactions are lit on social media with netizens making jokes on the app’s delay. 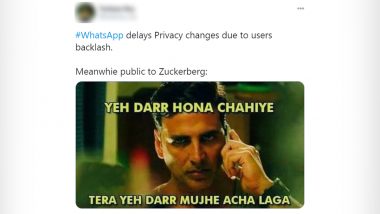 WhatsApp has recently faced extreme backlash on social media, amid mass confusion over data sharing with Facebook. Many people began to switch to other apps such as Signal and Telegram, to enjoy better privacy. Following global outrage, WhatsApp had reportedly delayed the data-sharing change. Yes, you read that right. The messenger app cancelled its February 8 deadline for accepting an update to its terms concerning sharing data with Facebook. Your account won’t be deleted for at least three months. The latest update has once again sparked, meme-fest on Twitter. WhatsApp funny memes, and hilarious reactions are lit on social media with netizens making jokes on the app’s delay.

It was at the beginning of the year, when WhatsApp users were alarmed with its privacy policy. The notification was sent to both Android and iOS users. Those who won’t accept the privacy, will no longer be able to use the app. It garnered a massive backlash on the internet, with netizens fearing over the data breach. Users began to switch to other rivalry apps such as Signal and Telegram. The Facebook-owned app, later clarified its take and shared detailed FAQs assuring users that no private chats will be leaked.

But that didn’t stop users flocking to other alternative apps. Signal and Telegram reportedly grabbed 40 lakh, new users, after WhatsApp began to send notification on new privacy policy. The Facebook-owned messaging app has now delayed its condition, for the next three months, at least. In an official blog post, WhatsApp informed users that no one’s account would be deleted on February 8, 2021. Social media is once again filled with hilarious reactions on Twitter that you cannot miss.

Whatsapp delays the new data share clause enforcement by 3 months. So we still have a couple of months to get used to @telegram / @signalapp 😊#WhatsApp

*le everyone switching from SIGNAL to WHATSAAP again pic.twitter.com/ztj3UBkjo6

#WhatsApp now making delay for 3 months...by moving all their consumers to other app they are scared i think #WhatsappNewPolicy

*Not a meme just a picture of WhatsApp's privacy* pic.twitter.com/92akHXvoJX

More updates on the same are awaited. Meanwhile, the messaging app assured to do a lot more to clarify the misinformation around how privacy and security work on WhatsApp, before finally rolling its latest update.

(The above story first appeared on LatestLY on Jan 16, 2021 10:34 AM IST. For more news and updates on politics, world, sports, entertainment and lifestyle, log on to our website latestly.com).