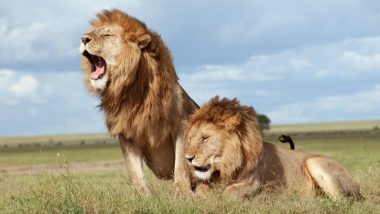 It’s World Lion Day 2020, today, August 10. The day aims to celebrate and raise awareness about the majestic hunter, the ultimate feline and the king of the jungle, Lions. It is a significant day, and animal enthusiasts around the world do their best to increase awareness about the animal and how we can protect them. In celebration of World Lion Day 2020, Gujarat Forest Department has a special treat for animal lovers. Yes, since Asiatic lions are known as the pride of Gujarat, wildlife division of Sasan Gir of Gujarat Forest Department has developed a film defining the importance of lions and what more can we do to protect them and their habitats. Since, we are in the middle of a pandemic, and going out is a big no-no, at the moment, unless for essential services, the forest department will make the video live on YouTube for viewers to watch the film from home, celebrating World Lion Day 2020.

Gir Forest National Park is a wildlife sanctuary in Gujarat. It was established to protect Asiatic lions. There are many videos and photos that show how the animals have been preserved in the jungle. The current range of Asiatic lion is restricted to the Gir National Park. Yes, it is the only home for Asiatic lions in the world. On the International Union for Conservation of Nature (IUCN), it is listed under its former scientific name, 'Panthera leo persica' as endangered because of its small population size and area of occupancy. To observe World Lion Day 2020, Mansukh Mandaviya, Union Minister of State, tweeted stating the Asiatic Lions are the pride of Gujarat. World Lion Day 2020: Date, Significance, Some Facts and Stunning Images of Lions, the King of Jungle.

Asiatic Lions are the pride of Gujarat, the state where I belong. Gir is a perfect example of how the kings of jungle should be treated in their favourable environment and surrounding. Once the pandemic is over, I invite you all to visit the Kingdom of Lions.#WorldLionDay pic.twitter.com/11H6MwhaKj

To celebrate the day, Gujrat’s Gir Forest developed a film for the purpose of awareness, sensitization and education about the Asiatic lions among the public. You can enjoy and watch the grandeur movie live on YouTube and know more about Asiatic lions and how Gir Forest plays a significant role in conserving them and their habitat for years now.

According to a report in June, 2020, the number of Asiatic lions in Gujarat’s Gir forest has risen. It has grown nearly 29% over the past five years. There is more to be done, and the forest department is doing its best to protect the lion population in the national park. Celebrate World Lion Day 2020 by observing the day and increasing awareness about lions through social media platforms.

(The above story first appeared on LatestLY on Aug 10, 2020 11:19 AM IST. For more news and updates on politics, world, sports, entertainment and lifestyle, log on to our website latestly.com).