This Year Ender 2019 list contains those videos. Tell us that you have forgotten the viral, “Piche Toh Dekho” kid, or even the training moments to raid Area 51! Before we bid adieu to 2019, let us look at the top seven viral videos that made us LOL this year. 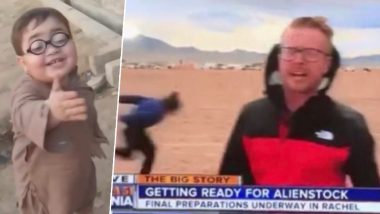 2019 is getting over and may we say; this year was all about viral videos? We sure can! Among the most significant changes in 2019 internet culture was the occurrence of memes and clips that originated on TikTok, before finding its way to Twitter or Instagram. But that stays for another day! At the moment, we look at the most-viewed videos that kept us insanely engaged. Some clips come and get attention for a few days and at max, a week! Again, there are others which stays for a longer time, paving the way for memes and other hilarious engaging content. This Year Ender 2019 list contains those videos. Tell us that you have forgotten the viral, “Piche Toh Dekho” kid, or even the training moments to raid Area 51! Before we bid adieu to 2019, let us look at the top seven viral videos that made us LOL this year.

1. ‘Simple’ Sketch and the Failed Attempts:

It just took about a few seconds for the artist to create this sketch. While she was drawing, it seemed pretty easy. At least, you would attempt, to create anything closer. But the outcomes were hilarious instead. Many failed attempts gripped the netizens on Twitter.

Oh boy, we bet you can never get over this kid! Peer Ahmed Shah, a Pathani kid from Pakistan, this adorable boy’s conversation in a typical Pathani accent broke the internet. The way he was giggling and screaming, ‘Peeche Dekho,’ Shah captivated the social media users. He even inspired much content for memes. His cuteness, also gave him a break and he became the brand ambassador of a Pakistani milk company, “Purelait.”

These kids are friendship goals! Spotting their other halves, the toddler ‘besties’ immediately run towards each other and hugs adorably. This video surfaced in early September, this year, but their cuteness remains and has undoubtedly given goals to all the BFFs alike.

4. If World Leaders Have A WhatsApp Group Chat:

Ukraine’s President, Volodymyr Zelensky at the country’s YES conference held in September, 2019 gave us a hilarious understanding of how it would be if the world leaders have a WhatsApp group chat. The video was a part of the presentation at the conference that he participated along with his former comic troupe.

Who thought that people would take the Facebook event to raid Area 51 so seriously? Not just preparations, a few of them actually flocked Rachel in Nevada on September for Alienstock. Media TV reporters were also among the thousands who drove to the scarcely populated town. Amid all of these, came a video that shows a guy Naruto-running behind a reporter on live TV. The clip went so viral that it even tickles your funny bones now, whenever you come across it.

A Georgian reporter was covering a marathon where participants were racing from the Talmadge Bridge in Savannah. She was interrupted while reporting live by a jerk, who just groped her butt and ran. The clip surfaced on social media significantly, which helped the reporter identify the man. He was later identified as Youth Minister.

I Tried Giving My Daughter The Worst Xmas Gift Ever & I Didn’t Expect This Reaction 😢 pic.twitter.com/44cJytI83m

This was surely the best video that we had witnessed on Christmas! It just made our holidays better. Where the parents of the little girl thought to purposely give the worst gift by presenting a banana. But the girl was overwhelmed. How adorable!

These were the seven videos that had gripped the internet the whole year. We always cherish the moments that made all of us laugh together. Well, these are those moments from social media that we will surely cherish in the near future. Let us hope 2020 brings in a lot of happiness, learning experiences and more videos that keep us entertained!

(The above story first appeared on LatestLY on Dec 26, 2019 07:30 PM IST. For more news and updates on politics, world, sports, entertainment and lifestyle, log on to our website latestly.com).