YouTuber James Charles has taken to Twitter sharing his nude pictures after his social media account was hacked. The 20-year-old YouTuber account was shut down as it was flooded with racist tweets. 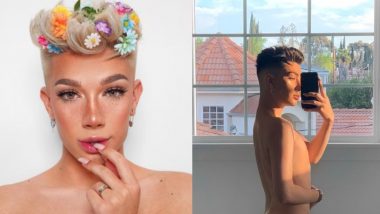 YouTuber James Charles has taken to Twitter sharing his nude pictures after his social media account was hacked. The 20-year-old YouTuber's account was shut down as it was flooded with racist tweets and he lost the blue tick that verified his account as credible. However, as soon his account was restored, the makeup mogul took to the platform sharing his naked picture. He tweeted that he shared his nudes so that nobody can use the pictures against him. YouTuber Chris Monroe Kisses His Sister In a 'Prank' Video, Horrified Fans Trash Him on Social Media.

Sharing a naked photo in the bath, James wrote, "Hi I got my account back. Just case I ever get hacked again, here's the ONLY nude I've ever taken! Can't threaten me with it now. Get a life." The NSFW picture was quick to go viral and has received over 1.25 lakh likes and more than 13,000 retweets. When a Twitter user commented that his nudes were unasked for, he replied saying, "Yeah well I didn't ask to have my security and privacy threatened either slutdelrey so this is me taking back ownership of the situation, move on with your day." The person who hacked James' account also praised infamous serial killer Ted Bundy as a picture the mass murderer was posted with the caption, "Ted Bundy aka our hero." There was also offensive, and sexually explicit tweets along with a Discord link. Newsha Syeh, Social Media Influencer Gets Slammed as Sex-Worker, Denied Entry in Louvre Museum in Paris for Wearing Revealing Outfit.

Here is the Nude Photo That The Beauty Influencer Posted on Twitter:

hi I got my account back 🙃 just case I ever get hacked again, here’s the ONLY nude I’ve ever taken! can’t threaten me with it now 🤠🖕🏼 get a life pic.twitter.com/8xT5lKFFDV

Multiple times in the past, YouTubers have been attacked by hackers. Earlier this month, American YouTuber Shane Dawson also fell victim to a similar incident. The hacker had retweeted anti-Semitic messages that sympathised with Nazi Germany. Earlier this year, James made headlines for his feud with fellow vlogger Tati Westbrook. He has also made it to the Time 25 list of most influential people on the internet.

(The above story first appeared on LatestLY on Aug 25, 2019 09:10 AM IST. For more news and updates on politics, world, sports, entertainment and lifestyle, log on to our website latestly.com).