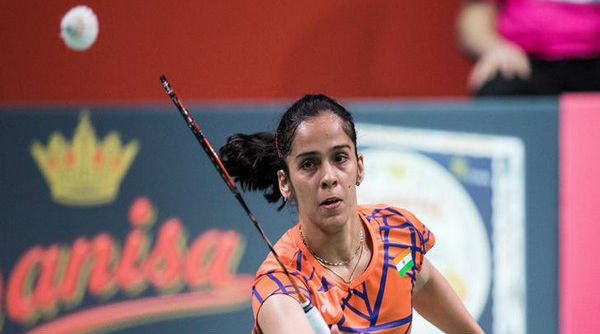 Paris, October 23: Indian shuttler Saina Nehwal on Wednesday progressed to the second round of the ongoing French Open here in Paris. Nehwal defeated Hong Kong's Cheung Ngan Yi in straight games 23-21, 21-17 in the first round match. Ngan Yi had an upper hand in the first game, but Nehwal was able to bounce back to take the win 23-21.

The 29-year-old Nehwal carried on with her winning momentum and she capitalised to win the match in straight games. Men's doubles pair of Satwiksairaj Rankireddy and Chirag Shetty came out triumphant in their match as they defeated Jelle Maas and Robin Tabelling of Netherlands 21-16, 21-14 on Wednesday.Kidambi Srikanth crashed out of the French Open after facing a first-round defeat against Taiwan's Chou Tien Chen 21-15, 7-21, 14-21.

In the 55-minute long encounter, Srikanth defeated his opponent in the first game. However, Chou made a comeback and thrashed Srikanth in the second and third games to proceed to the second round.Earlier in the day, Parupalli Kashyap was knocked out after facing a defeat against Hong Kong's NG Ka Long Angus 11-21, 9-21 in his first-round match.

Sameer Verma was defeated 22-20, 18-21, 18-21 in his first-round match against Japan's Kenta Nishimoto. The 25-year old shuttler gave a tough fight to his opponent but was defeated after the game went down the wire.On Tuesday, PV Sindhu managed to win her match to progress to the second round of the tournament.