BWF World Championships 2019: Carolina Marin Pulls Out of the Tournament After Failing to Recover From Knee Injury 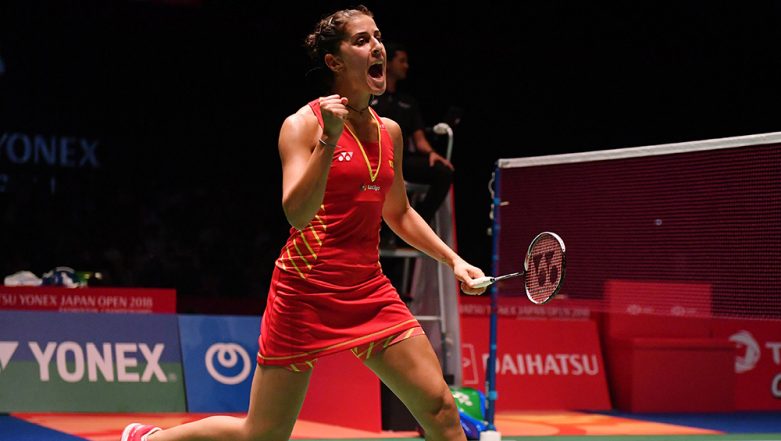 New Delhi, August 5: Rio Olympic gold medallist Carolina Marin has withdrawn from the upcoming BWF World Championships after failing to recover completely from a knee injury she suffered during the Indonesia Masters final in January earlier this year. Defending champion Marin had ruptured the anterior cruciate ligament in her right knee while competing in the Indonesian Masters final on January 26 and has since been sidelined from the competition. Carolina Marin Unsure About Participation in 2019 BWF World Championships, Says, ‘Focusing on Olympics'

She underwent knee surgery on January 29 and had accepted the initial invitation to play in the World Championships to be held in Basel from August 19-25. However, the Spaniard has now said she would not be able to participate in the event. "Me and my team has decided that we aren't going to play the World Championship because we are very short of time. The recovery is going well and the knee is running well. So we will wait till the tournaments of September," she said in a video message on Twitter on Sunday. Saina Nehwal Helps an Injured Carolina Marin, Sachin Tendulkar Shares Inspiring Picture to Congratulate Indian Shuttler on Indonesia Masters 2019 Title!

We won't go to the World Championships, but the return is soon 💪😉 #Basel2019 pic.twitter.com/JnQCraB6Ez

Marin would be replaced by Thailand's Nitchaon Jindapol in the tournament. Meanwhile, Indian shuttler H.S. Prannoy received a late call for the tournament following withdrawals by former world champion Viktor Axelsen and China's Shi Yuqi. Kidambi Srikanth, Sameer Verma and B. Sai Praneeth are the other three Indians who will be participating in the men's singles event at the championships.