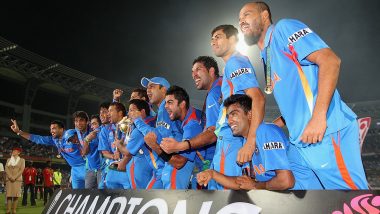 Former Sri Lankan players Mahela Jayawardene and Kumar Sangakkara have ridiculed former Sports Minister Mahindananda Aluthgamage claims, who said that the 2011 World Cup final was fixed. In the summit clash, Indian defeated their Asian neighbours to lift the prestigious trophy for the first time since 1983. MS Dhoni who led India to the triumph was also named as Man of the Match for his unbeaten knock of 91 runs. 'MS Dhoni Wasn't Sure', Kumar Sangakkara Speaks on 2011 Cricket World Cup Final Toss Controversy.

Mahindananda Aluthgamage who was Sri Lanka’s Sports Minister in 2011 said that the WC final between the two teams was fixed by certain groups. ‘The 2011 final was fixed. I state it with responsibility and I can come forward for a debate… I would not involve the cricketers in this. However, certain groups were definitely involved in fixing the game,’ he told News 1st on Thursday. Netizens Hail MS Dhoni As They Relive the Last Six of India vs Sri Lanka World Cup 2011 Final.

‘I stand by what I say. It took place when I was the Minister of Sports…I do not wish to expose details for the sake of the country. The game against India in 2011, a game we could have won, was fixed,’ he added.

After this claim, Mahela Jayawardena and Kumar Sangakkara, who were part of the Lankan team that night have dismissed those statements asking Aluthgamage to provide evidence.

‘Is the elections around the corner Looks like the circus has started names and evidence?’ said Jayawardene who played an unbeaten knock of 103 runs on that day.

Is the elections around the corner 🤔Looks like the circus has started 🤡 names and evidence? #SLpolitics #ICC https://t.co/bA4FxdqXhu

‘He needs to take his “evidence” to the ICC and the Anti corruption and Security Unit so the claims can be investigated throughly’ said Sangakkara who was Sri Lanka’s captain at that time.

He needs to take his “evidence” to the ICC and the Anti corruption and Security Unit so the claims can be investigated throughly https://t.co/51w2J5Jtpc

In 2017, former Sri Lanka captain Arjuna Ranatunga, who had been at the Wankhede as a commentator during the 2011 final, had also said that he had ‘doubts’ over the final and wanted an investigation. Gautam Gambir and Ashish Nehra had rubbished those claims at that time.

(The above story first appeared on LatestLY on Jun 18, 2020 06:09 PM IST. For more news and updates on politics, world, sports, entertainment and lifestyle, log on to our website latestly.com).