Taking to Instagram, Ab de Villiers revealed that he and his wife Danielle welcomed their first daughter on November 11, 2020. The newest addition to the De Villiers family has been named Yente de Villiers and wishes are pouring in for the little munchkin from all around the world. 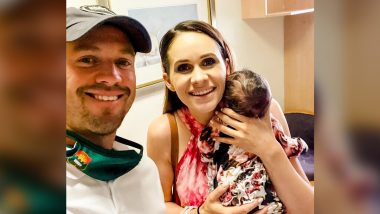 Former South Africa captain and Royal Challengers Bangalore (RCB) batsman AB de Villiers became a father for the third time. Taking to Instagram, the dashing batsman revealed that he and his wife Danielle welcomed their first daughter on November 11, 2020. The newest addition to the De Villiers family has been named Yente de Villiers and wishes are pouring in for her from all around the world. “On 11-11-2020, we welcomed a beautiful baby girl into the world Yente de Villiers, you are the perfect addition to our family and such a blessing. We are grateful beyond measure for YOU! Genade onbeskryklik groot. Dankie Here,” De Villiers wrote on Instagram while sharing the first picture of his third child. Ab de Villiers Pens Heartfelt Note After RCB’s Ouster in IPL 2020.

De Villiers and Danielle have been one of the most loveable couples in the cricketing world ever since they tied knots in March 2013. In 2015, they welcomed their first child who was named Abraham de Villiers while their second son John de Villiers was born in 2017.  On this occasion, however, the couple became parents of the girl child, and they are nothing but enthralled by Yente’s arrival. AB de Villiers Becomes First South African Batsman to Complete 9000 T20 Runs.

Meanwhile, AB de Villiers – who retired from international cricket in 2018 – was last seen in Dream11 Indian Premier League (IPL) 2020 where he played several staggering knocks for RCB. His exploits, however, weren’t enough as RCB did manage to reach the playoffs but couldn’t get their hands on the title once again. The dasher has pulled of the upcoming Big Bash League (BBL) 2020, and it will be interesting to see when he’ll get back in action.

(The above story first appeared on LatestLY on Nov 20, 2020 08:35 AM IST. For more news and updates on politics, world, sports, entertainment and lifestyle, log on to our website latestly.com).