Ajit Agarkar made his debut for the national side at the age of 20 in April 1998 against Australia in Kochi with his debut in Test coming later in the same year against Zimbabwe. The Mumbai cricketer ranks just behind Anil Kumble and Javagal Srinath in most ODI wickets for India and has also scored a famous century at Lords. 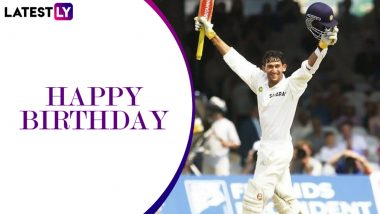 One of India’s most celebrated cricketers Ajit Agarkar will celebrate his 43rd birthday today (December 4, 2020). The Mumbai-born bowler has represented the Indian national team in both Test and ODI formats, taking a combined of more than 200 wickets. Agarkar is also the third-highest leading wicket-taker for the country in the 50-over format. So as he turns a year older, we take a look at some of his best performances.

Ajit Agarkar made his debut for the national side at the age of 20 in April 1998 against Australia in Kochi with his debut in Test coming later in the same year against Zimbabwe. Unlike the other pacers in the team at that time, Agarkar had the ability to cross the 140+ kmph mark on the speed gun. The Mumbai cricketer ranks just behind Anil Kumble and Javagal Srinath in ODI wickets for India and along with his bowling prowess, Agarkjar was also handy with the bat, scoring a famous century at Lords.

These are Ajit Agarkar’s best figures in ODI cricket and it came against one of the toughest teams – 200s Australia. The pacer was at his best at MCG in the first ODI of India’s 2004 tour in Down Under. The pacer rattled the Aussie opening order dismissing Mathew Hayden and Adam Gilchrist and later taking the wickets of Damien Martyn, Andrew Symonds and IJ Harvey. This is also the best ODI bowling performance by an Indian in Australia.

Ajit Agarkar despite playing as a specialist bowler, had the knack of scoring runs. In 2000 vs Zimbabwe in Rajkot, the Mumbai cricketer scored a brilliant half-century, which to date is the fastest fifty scored by an Indian in One-Day Internationals. Agarkar played a knock of 67 runs off just 25 deliveries.

Ajit Agarkar’s brilliant spell in this game led India to a sensational win in Adelaide. The bowler took two wickets in the first innings as Australia scored 556. India conceded a lead after their innings but Agarkar’s performance brought them in a commanding position. The pacer ran through the Australian batting line up taking six wickets in the second innings as the home side were bowled out for 196. India chased down the total with four wickets in hand.

Scoring a century at Lords is on the bucket list of almost every other cricketer and Ajit Agarkar has his name on the board. Needing 568 runs in 1st Test in 2002, India performed underwhelmingly as were on the cusp of a heavy defeat but an unlikely century from Ajit Agarkar gave them hope. However, he lacked support from the other end as India eventually lost the game by 170 runs but not without giving a tough fight courtesy of Agarkar.

(The above story first appeared on LatestLY on Dec 04, 2020 08:00 AM IST. For more news and updates on politics, world, sports, entertainment and lifestyle, log on to our website latestly.com).