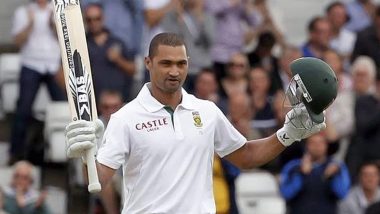 Former Proteas cricketer Alviro Petersen has Cricket South Africa in his sights as he has given the governing body an ultimatum to get in touch with him after their recent statement on the integrity of the 2015 Ram Slam match-fixing scandal. He has threatened to make the evidence public as he believes that the investigation carried out by the cricket board was 'biased'. Mzansi Super League 2020 Schedule to Be Decided This Month.

CSA released a statement regarding the match-fixing scandal during the 2015 Ram Slam competition, which saw several players being banned. CSA stated that a thorough investigation was carried out for approx 18 months with the CSA Anti-Corruption Unit acting in collaboration with, and with the assistance of, Judge Ngoepe, specialist external lawyers, the ICC, the BCCI, the Hawks and an external digital forensic team.

OFFICIAL STATEMENT: Cricket South Africa responds to attacks on the integrity of the match fixing investigations and allegations of unfairness and bias.

However, Petersen argued that a piece of new evidence has come to light which will show that the investigation carried out was biased. ‘NEW EVIDENCE CAME TO LIGHT THAT WILL SHOW THAT THE 'INVESTIGATION' APPEAR TO BE 'BIAS',’ wrote the former South Africa international.

BREAKING!!!!! NEW EVIDENCE CAME TO LIGHT THAT WILL SHOW THAT THE 'INVESTIGATION' APPEAR TO BE 'BIAS'. @OfficialCSA I will give you until 10h00 today to get in touch with me or I will present evidence publicly... 💥💥💥 https://t.co/bZVpJe7JmP

Couple hours later Petersen tweeted that several ‘heavyweights’ from various section of society and the CSA officials had contacted him and he hopes that the right action will be taken or else he will speak out again.

Mzansi, I can confirm that the HEAVY, HEAVYWEIGHTS from various sections of society including from @OfficialCSA have been in touch with me from 09h00 today. They complied! Thank you all 🙏🙏 We will see action hopefully, or I come out again. https://t.co/YiiblkuDQ5

On Saturday, Petersen again took to Twitter to say that he will soon post some evidence to show that the investigation was biased and shared a quote from South African cricketer Vaughn Van Jaarsveldt where he said that he followed the instructions given to him but pointed out that another ‘black’ player with similar facts was publicly humiliated.

BREAKING!! It would appear that the @OfficialCSA investigation was 'BIAS' - Vaughn Van Jaarsveldt made the following comments in an interview on 7/8/20 pic.twitter.com/aiMmo68iSp

I have some more, much more on the "match fixing saga"

You are well advised not to antagonize me at this juncture!!

Earlier this week Tsolekile, who copped a 12-year ban from all forms of cricket for his involvement in the incident, said in an interview with Robert Marawa that CSA overlooked the role white players Vaughn van Jaarsveld and Robbie Frylinck played.

(The above story first appeared on LatestLY on Aug 08, 2020 05:03 PM IST. For more news and updates on politics, world, sports, entertainment and lifestyle, log on to our website latestly.com).