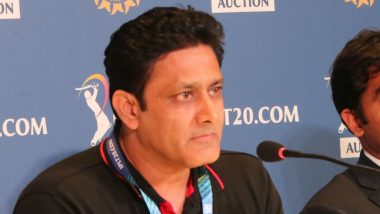 New Delhi, May 26: The ICC Cricket Committee apart from suggesting the ban on use of saliva on the ball when cricket resumes, has also suggested the use of an extra review in the DRS. And committee chairman Anil Kumble has now thrown light on the reason behind the suggestion from the committee which has also called for local umpires at a time when the world is coming to grips with the effects of the coronavirus pandemic.

Speaking on Star Sports show Cricket Connected, Kumble said: "I think the need of hour was to start cricket. We also felt that because of travel restrictions, there could be quarantine measures. You don't have too many elite umpires in the panel. So, we felt that for cricket to kickstart, its best to use local umpires. Most countries don't have the experience, the local umpires don't have the experience of a Test match or being part of a Test match. The reason that we started neutral umpiring 20 years ago was because there was the perception of a bias. Virender Sehwag Bats for Anil Kumble to Become National Selector of Indian Cricket Team.

"The recommendation for an extra review for both teams is not to root that out, but we felt that there could be potential inexperience being in a Test match situation, which is why the advantage of the additional review would probably benefit both the teams. That's one of the reasons why we recommended that we should give the additional review to both the teams in these scenarios."

The committee recommended banning the usage of saliva to polish the match ball. It however noted that the risk of spread of the virus through sweat is "highly unlikely" and "saw no need to prohibit" the practice.

"The ICC Cricket Committee heard from the Chair of the ICC Medical Advisory Committee Dr Peter Harcourt regarding the elevated risk of the transmission of the virus through saliva, and unanimously agreed to recommend that the use of saliva to polish the ball be prohibited," said the ICC in its statement.

"The committee also noted the medical advice that it is highly unlikely that the virus can be transmitted through sweat and saw no need to prohibit the use of sweat to polish the ball whilst recommending that enhanced hygiene measures are implemented on and around the playing field."

(The above story first appeared on LatestLY on May 26, 2020 10:22 PM IST. For more news and updates on politics, world, sports, entertainment and lifestyle, log on to our website latestly.com).