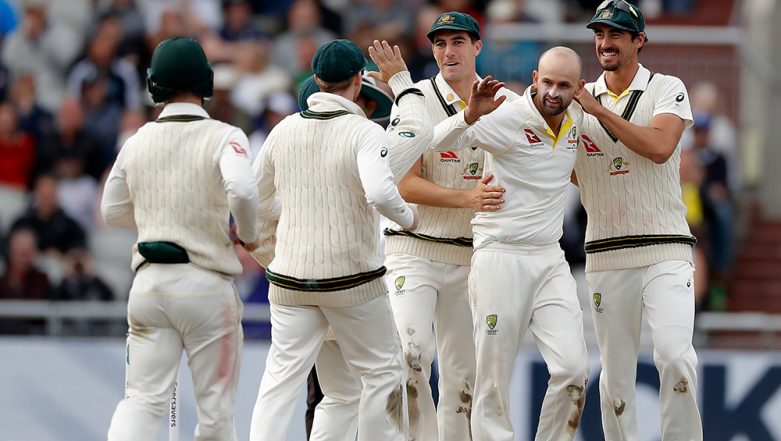 Australia made a great comeback in ongoing Ashes 2019 series with a magnificent victory over hosts England by 185 runs in the 4th Test. Steve Smith’s return played a massive role in Australia’s favour. After the visitors won the match and led the series 2-1, Twitter was flooded with fans and cricketers’ reactions. Australian cricket fans, who were disappointed by England’s close victory in the 3rd Test by one wicket, were filled with joy after their team’s spectacular victory. Ashes 2019: Jason Roy Clean Bowled by Pat Cummins During England vs Australia 4th Test, Twitterati Troll Him With Funny Memes Over His Poor Batting.

The top order of England totally failed after Rory Burns, Joe Root were dismissed for a duck. Joe Denly (53) smashed a half-century along with Jos Buttler (34), who held England's hopes of a draw at one moment on the fifth day of the match. However, England eventually lost the match and went 2-1 down in the Ashes 2019 series with one more Test match to be played. Australian fans were thrilled over their national team's triumph on English soil while England fans were disheartened over the results. Some former England and Australia cricketers also praised the Tim Paine led side. Have a look at some of the tweets below. Mitchell Starc Breaks Joe Root’s Abdominal Guard During Ashes 2019 4th Test, England Skipper Hurt Post Australian Bowler’s Frightening Pace Delivery (Watch Video).

What an effort by England today .. Great fight .. But well done Australia on retaining the #Ashes .. no point in pretending but they have been the better team .. better in all departments ..

Tim Paine who was contemplating retirement a year back now becomes the first Australian captain to win an Ashes in England since 2001.

Destiny is what we write with our choices. #Ashes

BREAKING: Australia retain the Ashes. Congratulations to Tim Paine & his excellent team.. especially the mercurial @stevesmith49 & those brilliant fast bowlers. Been a wonderful series but they’ve been the better side. #Ashes #EngvAus pic.twitter.com/MBRd1erJCA

On paper, neither side looked like winning an away Ashes in these times. Oz have changed the game though. Your move, England.#Ashes19

Smith’s double hundred (211) knock in the first innings helped Aussies to put a massive 497-8 runs on the scoreboard while batting first. England tried their best but could only manage 310-10 against Australia’s challenging bowling attack. Joe Root played a knock of 71 runs in the first innings but completely failed in the second innings.

Ben Stokes, who single-handedly took Australia to victory in the third Test at Headingley, Leeds with his 135-run knock, could only score 1 run in the second innings. England were bowled out for 197.  England will have the opportunity to level the series in the fifth and the final Test match, starting on September 12 at Kennington Oval, London.